Adam Levine is celebrating his engagement to his model girlfriend Behati Prinsloo, but his ex-girlfriend is reportedly heartbroken about the news. 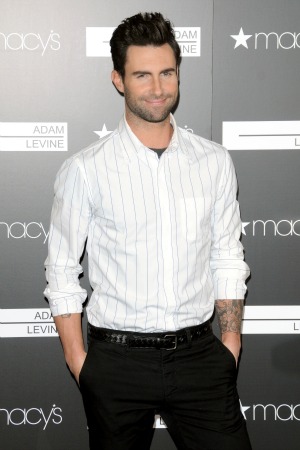 The happy couple has been off-and-on-again since 2012 and, after a brief split this year, Levine realized that Prinsloo was “the one” and took things to the next level.

The 24-year-old model is not the only beauty to be linked to the front man — he has been linked to a number of lovely ladies in the past — including 21-year-old Danish model, Nina Agdal.

The singer and his now fiancée had briefly split back in March and, during their break, Levine was rumored to have rekindled things with ex-girlfriend Agdal.

The pair was spotted taking a holiday together in Los Cabos, Mexico, in June — just weeks before his engagement to Behati was announced!

It is reported that Agdal is heartbroken about the news of the engagement and admittedly so are we, just a little.

According to the New York Post, the 34-year-old singer let his ex-girlfriend know about his engagement by sending her an impersonal text message. A little insensitive, don’t you think?

It has been reported that Levine was not really serious about his relationship with Agdal and wished to get back together with Prinsloo.

Representatives of all parties have declined to comment, but earlier this week, Life & Style magazine said Agdal is doing her best to move on.

“She didn’t see it coming it all,” a source explained. “Her dad came out to LA for a few days, then went with her to Mercedes Benz Miami Swim Week.”

The former couple had reportedly begun seeing each other after Levine split from Victoria’s Secret model Anne Vyalitsyna in April last year.

Are you seeing the pattern here? Levine definitely has a thing for models. We wish Levine and Prinsloo all the best for their forthcoming nuptials and the model most certainly seems excited about their wedding and the romantic proposal.

Prinsloo told ET Canada (via People), “I am so happy and excited and still can’t believe it’s true!” she said. “It was a one-knee thing! It was serious, it was very old school!”

Prinsloo also recently revealed that they haven’t even discussed wedding plans yet as she made her first public appearance since becoming an engaged woman.

“I’m so laid back — my mind has been going but we haven’t talked about anything!’ she confessed to Us Weekly at the launch of the new Victoria’s Secret fragrance in New York on Thursday.