Snooki and JWoww are at odds with a small New Jersey town over where to film their Jersey Shore spinoff. 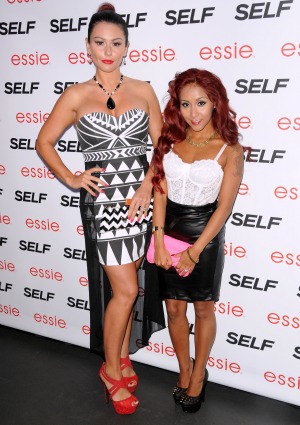 Call it a classic case of NIMBY: Residents of Pelican Island, a small town in New Jersey, are actively campaigning to keep Snooki and JWoww — along with their MTV camera crews — far, far away.

The reality stars are eyeing a home in the area as the base for their Jersey Shore spinoff, but an attorney representing 12 families in the neighborhood said MTV is an unwelcome intrusion.

“This is in a residential zone and use of it is very restrictive,” attorney Ron Gasiorowski told the Asbury Park Press. “They didn’t disclose to anyone what they were doing there. People first became aware of this when they started to see trucks and equipment being delivered to the site.”

Township council president James Byrnes was more direct with his criticism for Snooki. “For her to bring her family and stay there is a great thing,” he told the APP. “But the timing’s not right, and the commotion of just the show, what the show causes, is outrageous.”

But new mom Snooki and her pal JWoww are not taking this lying down. Both tweeted their displeasure over the situation.

“Insult my son & fiancé, and I will go mama bear on your ass,” wrote Snooki.

She later penned an open letter to fans on her blog, writing, “I just have to tell all my fans and supporters how much your positivity means to me. There is so much hate in this world, and your positivity and love you show to me is beyond rewarding. I want to say thank you for always believing in me, always sticking up for me, and most of all, always showing love and never letting the haters phase you.”

“You’re all my best friends even if we haven’t met yet, we’re besties for life because we have each other’s back no matter what. Don’t ever let the haters bring you down, you’re an amazing person inside and out, and people are just damn right jealous. SO KISSES TO YOU ALL FOR ALWAYS BEING THERE FOR ME AND JUST GETTING IT. YOU UNDERSTAND ME AND I LOVE YOU FOREVER.” XOXOXO

JWoww added, “Laughing so hard over these reports @snooki … Who would’ve thought 2 girls can piss so many people off#embracethehaters”

MTV has not commented on the situation (or The Situation — where has he been lately?).