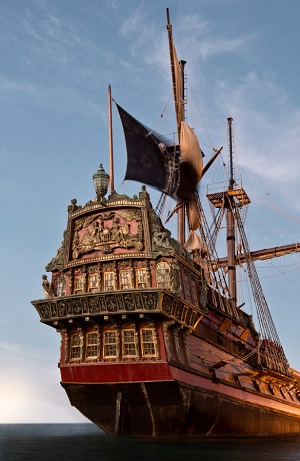 If you loved Disney’s Pirates of the Caribbean, you’ll love STARZ’s Black Sails. Be prepared, though: This is in no way a kid-friendly television show. Black Sails is gritty, sexy and real. Not the fantastic, light-hearted version starring a rum-soaked Sparrow.

Black Sails is a prequel of sorts set 20 years before Robert Louis Stevenson’s classic tale Treasure Island. Most of the characters names won’t even sound familiar. But, you will meet a very young Captain Flint, played by the yummy Toby Stephens, as well as John Silver.

Just because the pirate is cute, doesn’t mean it’ll be a happy experience, though. When Flint finds himself in the company of a shipping magnate’s daughter, things take a turn for the interesting. Especially when you consider that the daughter has also had a relationship with a young prostitute.

“Prostitution?” Yes, of course. Pirates aren’t born rich and Black Sails is set in a time (just like now) when everyone was struggling financially and doing everything they could to make ends meet.

“It’s really the nitty, gritty real stuff. Hard realities,” Zach McGowan (Shameless) told us. “This is about people who are really scratching tooth and nail to survive.”

Dark, sure. But also realistic.

Making the entire show even more realistic is the magnificent setting. Black Sails was filmed in South Africa on two custom-built but fully-functioning pirate ships. And those men you see dangling from the masts and rigging sails? They were some of the very few people left in the world who actually know how to do it.

The creators of the show, Jonathan E. Steinberg and Robert Levine, did massive amounts of research and McGowan said everyone on set took it seriously. Not only did production basically create an entire world around them — with no CGI and everything being real and tangible — but the actors did their best to be as authentic as possible, too.

For more TV news, sign up for the newsletter >>

“Everyone took as much of the research to mind as possible, but you’ve got to make it your own.”

Oh, man! Now we really can’t wait for the premiere of Black Sails.