They may not have won big on the second season of The X Factor, but Emblem3 is hoping to make it big on the charts with their new album, Nothing to Lose. 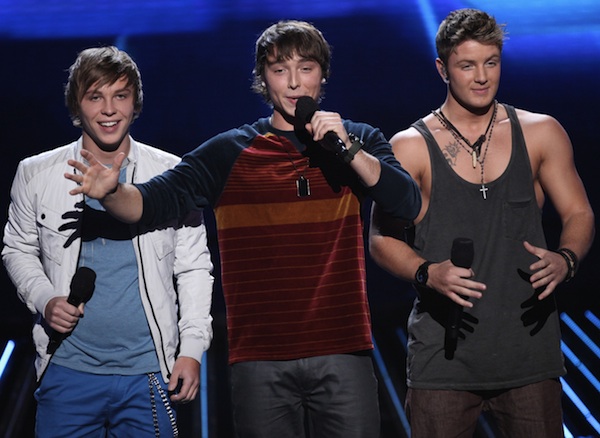 It’s almost better to lose some of these big reality shows than win them.

Jennifer Hudson? Won an Academy Award but not American Idol.

With their distinct beach/pop/rap sound that The X Factor viewers loved, Emblem3 is hoping to follow the footsteps of their fellow losers.

After finishing fourth in The X Factor‘s second season, teen brothers Wesley and Keaton Stromberg and their childhood friend Drew Chadwick, otherwise known as Emblem3, are about to release their debut album next week.

Titled Nothing to Lose, the three guys co-wrote much of the album with a bit of help from the likes of fun.’s Jack Antonoff and Benji and Joel Madden of Good Charlotte.

For three kids from Washington state who were unknowns just a year-and-a-half ago, the chance to record an album and have it released on Simon Cowell’s record label has not been taken for granted.

In a press release about the album, Wesley stated, “we are so stoked to finally get to share our new music with the world! It’s been a dream come true recording this first record and we are forever grateful.”

Drew noted, “We put our heart and soul into each track. We hope that these songs can reach out and connect to as many people as possible and let them know to keep their chin up and never give up because dreams do come true.”

Keaton gave some insight on where the album title came from. “Live each day like it’s your last and live like you’ve got nothing to lose!”

Even though the album hasn’t been released, the guys are already getting noticed for their single “Chloe (You’re The One I Want).”

Last month, the guys appeared as a part of ABC’s Good Morning America Summer Concert Series. The guys will also be performing Monday, July 29 on The View and they are nominated for Choice Music Breakout Group and will be presenting at FOX’s 2013 Teen Choice Awards in August.

Emblem3 is out on a small tour now before hitting the big time and joining Selena Gomez on the Stars Dance arena tour across the U.S. and Canada kicking off on Aug. 14 in Vancouver and running through the end of November.

Check out Selena looking hot in her new video >>

Watch the video for “Chloe (You’re The One I Want)” and let us know in the comments if you think this band is a winner.