It comes as a surprise to almost everyone, but Jimmy Fallon and his wife had a baby Tuesday morning. He joked for nine months about the royal baby without revealing he was about to welcome his own bundle of joy. 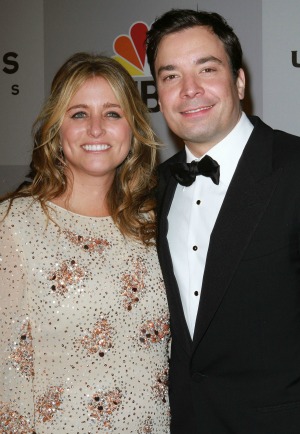 It’s a week full of babies! Adding one more to the list of celebrity babies born this week is Jimmy Fallon and his wife Nancy Juvonen Fallon’s new baby girl. The couple had the baby on Tuesday, July 23.

The Fallons said they are “overjoyed about the arrival of their beautiful daughter,” according to People. Fallon, 38, and his wife, who is 46, were married in 2007.

Juvonen Fallon works as a producer with Drew Barrymore, as the co-owner for her Flower Films. She has worked with the actress on multiple movies including Never Been Kissed, 50 First Dates, Music and Lyrics and Charlie’s Angels.

Juvonen’s brother, Jim, had also worked as a producer on Late Night with Jimmy Fallon.

The couple already have one child, Gary, a golden retriever. She often appears with Fallon on his talk show.

Fallon didn’t announce the pregnancy, though he did joke about the royal baby for nine months without once saying he was about to become a father.

Like the royal baby, the Fallons haven’t yet announced the name of their new addition. Fallon did, however, tweet about the royal baby on Monday.

“Kate Middleton went into labor this morning,” he said. “When the rest of the royal family heard, they said, ‘Oh my God — what’s ‘labor’?”

Others took to Twitter to talk about Fallon’s new baby, and the similarities to the other new babies born this week.

According to E! News, Fallon was on the air Monday night, but Tuesday’s show will be a repeat.