The Avengers isn’t the only superhero team in the universe. The Guardians of the Galaxy are about to steal their shine. 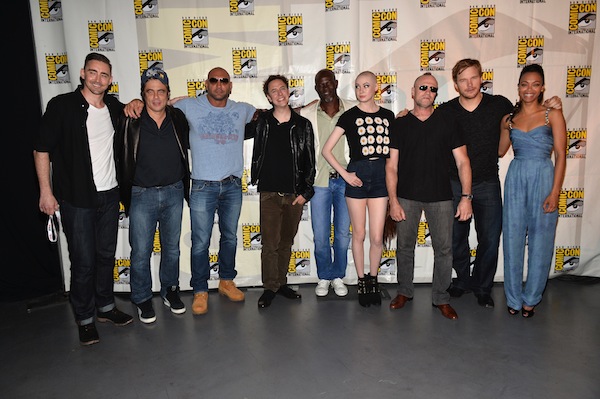 Just days after their appearance at Comic-Con, the cast of Guardians of the Galaxy are back at work. Tuesday, Marvel Studios announced the superhero movie is officially in production. Technically, they’ve already been shooting for two weeks but without all its stars ( i.e. Benicio del Toro).

Guardians of the Galaxy is based on the comic of the same name and part of Marvel’s next phase of films. The studio’s moving towards more space-related drama. They’re upping the fantasy element and Guardians is the perfect movie to kick things off.

Saturday, most of the cast made its debut in front of thousands at San Diego Comic-Con. Marvel Studios’ President Kevin Feige was on hand to help introduce Chris Pratt as Peter Quill, aka Star-Lord, Zoe Saldana as Gamora, Dave Bautista as Drax the Destroyer, Lee Pace as Ronan the Accuser, Michael Rooker as Yondu, Karen Gillan as Nebula, Djimon Hounsou as Korath and del Toro as The Collector.

Missing from the panel was John C. Reilly who plays Rhomann Dey, and Glenn Close as Nova Prime. Guardians of the Galaxy is directed and co-written by James Gunn, who’s best known for smaller genre films like Super and Slither. Similar to Joss Whedon, Marvel is letting an actual comic book fan direct their comic book movie.

Guardians of the Galaxy is being filmed at Shepperton Studios in the UK. The film opens in theaters Aug. 1, 2014.

Are you excited to see Guardians of the Galaxy?