Keeping Up with the Kardashians is in its eighth season and has enjoyed great success, but Kris Jenner and Kim Kardashian may be quitting.

Hmm, not sure how believable this statement is coming from the mother and daughter duo who have achieved worldwide fame from being reality TV show stars. 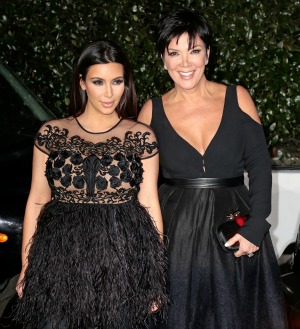 Kris Jenner and daughter Kim Kardashian are part of the reality TV show Keeping Up with the Kardashians and apparently want to end the show — which airs the family’s daily lives — on a ”high note.”

A source told Naughty But Nice Rob, “It has been the biggest reality franchise of highest. Both Kim and Kris want to make sure they end on a high note, leaving fans wanting more, rather than try and stretch the show on for another few seasons and watch it die a death.”

“Plus, they are now moving on in their lives… exploring new options and opportunities.”

Jenner has a new talk show, and wants to devote her time to its success in hopes of winning an Oscar.

“Kris wants to focus on being a talk-show host and maybe start producing movies. She’s telling everyone that one day she will have an Oscar,” the source continued.

Kardashian has just given birth to her baby daughter with partner Kanye West and has kept her baby out of the limelight so far. It’s reported that she wants to focus on her privacy, change her lifestyle and have more time for her young family.

What are your thoughts? Do you think it is time for the show to come to an end or do you think that Kardashian and Jenner enjoy reality TV too much to give it up just yet?