The world’s most anticipated baby made his royal debut on the steps of St. Mary’s Hospital today as Prince William and Kate Middleton left for home with the Prince of Cambridge. 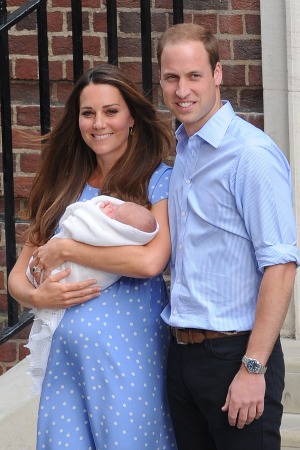 Prince William and Catherine, Duchess of Cambridge introduced the newborn royal baby to the world on the steps of the hospital where he was born, 31 years after the world met Wills in the same spot.

Kate Middleton was glowing in a light-blue dress with white polka dots as she emerged from the Lindo Wing of St. Mary’s Hospital with the baby snugly in her arms. A few moments later she carefully transferred him into his father’s arms, a move any parent knows is fraught with peril the first few tries.

The newborn prince was wrapped cozily in a blanket, making it difficult to see his face, but his little fingers reached up several times. According to William, “He’s got her looks, thankfully,” causing Kate to heartily disagree. “No, no, no, I’m not sure about that.”

“It’s such a special time. Any family knows what this feeling is like,” Kate said, calling the moment “very emotional.”

“Well he has a good pair of lungs on him, that’s for sure,” William joked. “He’s a big boy, quite heavy.”

William also confirmed that the baby was overdue, saying, “I will remind him of his tardiness when he is older.”

The couple then went back inside the hospital, placed the baby in a car seat and re-emerged to hop in their car — William placed the car seat securely in the back then drove his new family away himself. 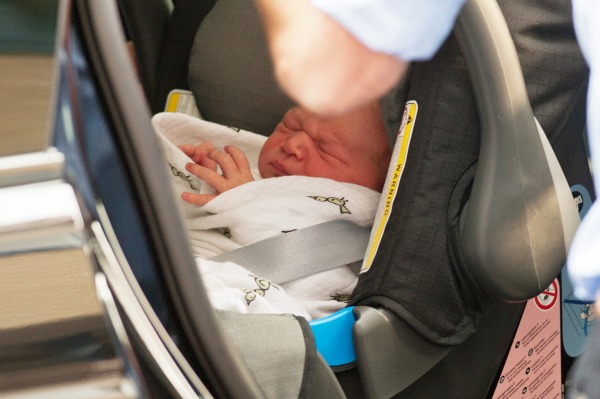 According to a statement from Clarence House, “The Duke and Duchess of Cambridge and their son will travel home to Kensington Palace.” The family is expected to remain there until William returns to work as an RAF search and rescue pilot in approximately two weeks, when it’s rumored Kate and the little prince will shack up with her parents in their Bucklebury country house.

The couple currently reside in the two-bedroom Nottingham Cottage on the grounds of Kensington Palace while their luxe 20-room Apartment 1A in the main building is refurbished.

Now we’re just missing one small but important detail: The royal baby’s name. Prince William said they’re “still working on a name,” but will arrive at a decision “soon.” If they need some help they could always turn to these royal baby name suggestions on Twitter.

Stars tweet their excitement ahead of royal baby birth
The royal baby already has its own title!
Another royal baby on the way! Zara Phillips is pregnant