Beyoncé recently had an unpleasant encounter with a cooling fan while onstage during her latest concert in Montreal, Canada.

Beyoncé is currently on her Mrs. Carter Show World Tour and the singer caused panic on Monday night, July 22, during her performance in Montreal, Canada, when her luscious blonde locks became tangled in the blades of a large fan blowing air onto her. 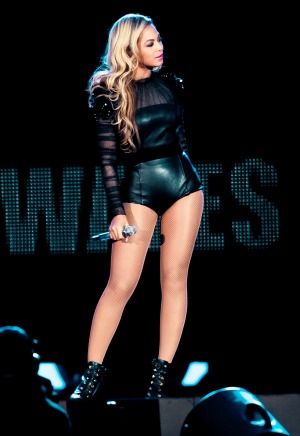 Beyoncé had been seated next to the fan — which was on the edge on the edge of the stage — for her finale performance of “Halo” before her tightly curled hair was sucked into the machine.

The 31-year-old pop megastar showed her professionalism while she continued her performance, seemly unperturbed by the incident. Holding on to the roots of her hair to prevent it from getting tangled further, she continued to expertly perform her song as her fans watched in shock.

It wasn’t long before the singer’s security rushed over to the stage to rescue her tangled curls from further destruction. Ever the lady, Beyoncé managed to see the humor in the situation as she later posted a handwritten note on Instagram where she described what had happened.

The singer, who is married to Jay Z, reworked her “Halo” lyrics in the note when she wrote, “Gravity can’t begin to pull me out of the fan again.”

The singer caused an enthusiastic fan to faint from sheer excitement when she was overcome by emotion at meeting Beyoncé and receiving a hug from the superstar during a rendition of her hit “Irreplaceable.”

We love Beyoncé for being such a trouper about the incident and for showing love to her fans! Let’s hope the rest of her World Tour goes off without any malfunctions.