We’re officially calling “shenanigans” on Matt Smith and Jenna-Louis Coleman from Doctor Who. 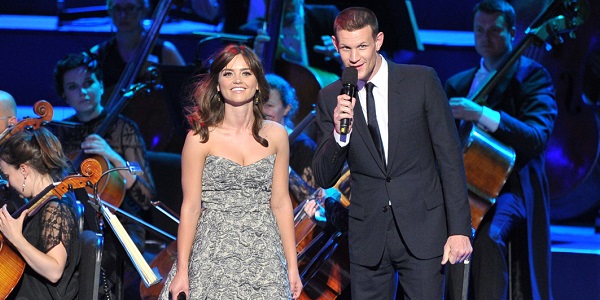 The man behind the 11th Doctor, Matt Smith, and the girl who plays his latest companion Clara, Jenna-Louis Coleman, pulled a fast one on Comic-Con attendees over the weekend. If you were dressed as the Doctor and received a screamed compliment from a nearly bald crazy man in a car with tinted windows, it was probably none other than Matt Smith.

Doctor Who dreamcasting: Why not a woman? >>

When SheKnows spoke with Smith and Coleman on Sunday morning, they were giddy to share their little prank with reporters.

“We’ve been, rather shamefully, driving around Comic-Com,” Matt Smith began, grinning from ear-to-ear. “It’s a terrible thing, we’re boosting our egos, probably. When we see someone dressed as the Doctor and Clara, we roll down the window and go, ‘Hey, Doctor! Nice suit!’”

Coleman explained that it’s hard not to get caught up and excited by seeing all the fandom in full bloom.

“It’s great seeing people as excited as you,” Coleman explained of the fans and the crowds.

Prince Charles geeks out on the set of Doctor Who >>

All their trolling was purely in fun and no doubt anyone who was fortunate enough to receive the compliment had to have felt pretty honored. There was one instance, though, where a costumed Whovian may have under-reacted due to his sheer obliviousness.

“But there was a guy yesterday… We were like, ‘Hey, Doctor! Nice suit!’ and he was like, ‘Oh, yeah. Cheers mate. Nice one,'” Smith explained. “And there was a Clara behind him. The window went up and we drove off and the Clara tapped him on the shoulder and was like [gesturing that the people in the car were Smith and Colman]. And he was like, ‘Noooo!’”

That had to be embarrassing for him, but we can’t blame him for missing the moment. The sidewalks at Comic-Con were nothing short of insane. It was easy to become a little glazed over as you felt overwhelmed. Making things even harder, of course, was Matt Smith’s new ‘do. He recently shaved off the Doctor’s signature floppy hair and is opting for more of a buzz cut.

He still looks dashing, though, and clearly he’s as goofy as ever!

For all the latest TV news, our newsletter is the one to get >>