Kim Kardashian and Kanye West have almost everything, and now they can apparently add four gold-plated toilets to that growing list. 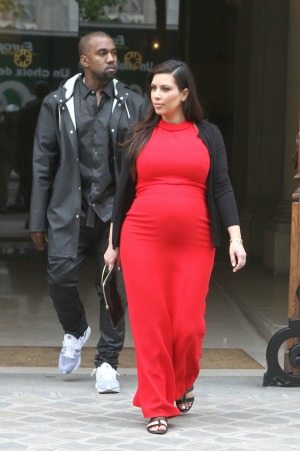 Kim Kardashian and Kanye West have reportedly spent more than $750,000 on gold-plated toilets for their Bel Air mansion. The couple may not be fortunate enough to have a royal throne, but at least they will have their own version every time they enter their bathrooms!

The Hollywood couple are awaiting the completion of renovations on their $11 million-dollar home, which they purchased in February. It appears that money is not a problem for Kardashian and West, who have been splurging on their interior.

A source revealed to The Sun U.K., “They expect the interior to cost twice as much as the property. They’re spending more than a million on a security system alone.”

It is not just the golden toilet seats that have cost hundreds of thousands. Kimye are reported to have also splurged on luxury bedding, which has cost more than $1 million.

It has been reported that regular beds are not good enough for West and that he has ordered six special edition beds to ensure they meet hotel standards — the standard of London’s Savoy Hotel, to be exact.

According to TMZ, the couple’s luxury home is also said to include a hair and makeup salon, bowling alley, indoor and outdoor pool, basketball court, movie theater, custom gym, and if that is not enough, a Swarovski-encrusted fridge freezer.

“It’s so exciting for them,” a source told People magazine. “The house is gorgeous. And they really wanted and needed the privacy.”

Sounds like this house is going to be more than just private, but also extravagant! The couple have just recently welcomed their first child, baby North, however, there’s still no public announcement about a future wedding.

Kardashian’s divorce from NBA star Kris Humphries was finalized in May and now there is speculation as to when she could be walking down the aisle again, this time to marry West.

One person who is waiting with bated breath for the news of marriage is the reality TV star’s mother, Kris Jenner. Jenner has previously admitted during an appearance on The Talk that the fact that the couple are still not married is, “so annoying.”

A source close to the Kardashian family revealed to Radar Online that, “Kris Jenner is ecstatic that Kim is dating Kanye; she can see their celebrity stock and wealth rising by the day! She has already told Kim that if they make it down the aisle they are going to do it on camera again.”

“You would think most moms would be keen for their daughter to take it slow, especially seeing as Kim’s divorce still isn’t finalized from the last fiasco,” the source added.

What do you think of the Hollywood couple’s spending spree? Did they earn it, or could their money have been better spent?