The royal baby received his first visit from his grandparents today when Kate Middleton’s parents stopped by the hospital, followed by Prince Charles and Camilla. 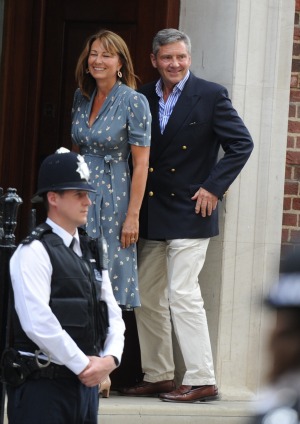 Beaming with pride, Michael and Carole Middleton arrived at the Lindo Wing of St. Mary’s Hospital to meet their grandchild for the first time after the birth of the royal baby and spoke briefly to the press afterward.

Carole said that the boy was “beautiful,” but when asked if she would reveal the child’s name, she exclaimed, “Absolutely not!”

Sigh. So still, all we know is that the little tike already has his own title.

Prince Charles and Camilla popped in too, telling the press the baby is “marvelous” as they quickly scooted back into their car.

The grandparents were not the only Brits to welcome the new addition. Baby Cambridge received a 41-gun salute from the King’s Troop and the City of London’s Army Reserve Regiment fired a 62-gun salvo from the Gun Wharf at the Tower of London.

The same three bell ringers who performed the task when Prince William was born set forth a series of peals from Westminster Abbey, joining seven others to ring the church’s 10 bells at the same time as the gun salute and lasting more than three hours.

Meanwhile, Will and Kate are sending their thanks to the people who have taken such good care of the new mother and child in the face of intense press scrutiny: St. Mary’s.

“We would like to thank the staff at the Lindo Wing and the whole hospital for the tremendous care the three of us have received,” the couple said in a statement.

“We know it has been a very busy period for the hospital and we would like to thank everyone — staff, patients and visitors — for their understanding during this time.”

A spokesperson for Kensington Palace added, “Mother, son and father are all doing well this morning.”

The young family is expected to leave the hospital later today. Kate’s hairstylist was spotted entering the ward, along with an assistant carrying a baby seat.

Stars tweet their excitement ahead of the royal birth
Another royal baby on the way! Zara Phillips is pregnant
Royal baby at risk: Real danger awaits Will & Kate