Yes! The next Doctor could certainly be a woman! “Twelve” has quite the feminine ring to it, too, does it not? 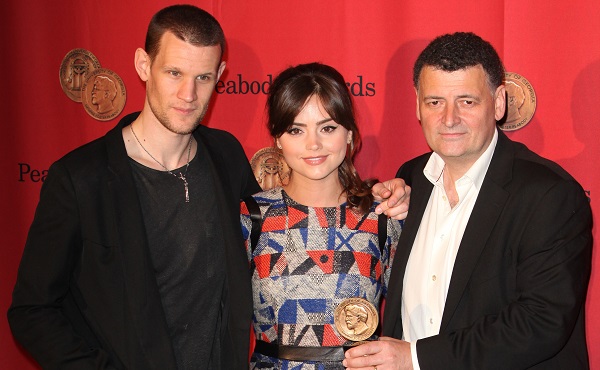 When we found out Comic-Con would afford SheKnows the chance to chat with Doctor Who‘s Matt Smith and Steven Moffat, we knew exactly what we wanted to ask. Could the Doctor be a woman? Upon Matt Smith’s announcement that he’d be departing from the show, many fans were quick to suggest having a female or black Doctor. When we suggested a few ladies we thought might be perfect for the role, some of you were livid.

It’s time to unbunch those panties, though, Whovians. Moffat and Eleven have spoken and (neener-neener!) we were right. The Doctor could very well regenerate into a lady. As a matter of fact, before we even broached the subject with the guys, Smith had been in a panel discussion where he had already suggested such a transformation.

Prince Charles geeks out on Doctor Who set >>

Teasing on how his time on Who will come to an end, Smith said, “I feel like I already know how it ends. There’s a golden light, open a Tardis, put my arms out… and then I turn into a woman!”

Later, when we spoke to the show’s writer, Moffat, we pestered him for more info. We knew we’d never break the news of the next Doctor, but we were hoping for hints… or at least a chance to be right. At least to hear him say the Doctor could, technically, regenerate into a woman. And he did.

“Within the narrative of Doctor who, it is possible for him to be female,” Moffat told us. He was quick to point out, though, that such an answer didn’t mean it would definitely happen, either.

“I can’t talk about who the new doctor is going to be because I don’t know. It is going to be the person who is right for it right now. But it’s based 100 percent on the quality and special nature of the performer. There is no political agenda. There’s nothing whatever except choosing the best person for the part.”

Later, Smith agreed that not only could the Doctor be a woman, but that it might actually be pretty cool, like bow ties.

“Yeah, don’t see why not!” Smith said. Would he want to see it, though? “I just want to see the best actor for the role, you know? Man, woman, otter… doesn’t really matter.”

So, ha! While Moffat’s candor made it seem pretty unlikely that Twelve would, indeed, be a chick, it’s not out of the realm of possibility. No matter who or what the Doctor turns into, though, you can expect that we’ll be watching. You, too, right?

For more TV news, sign up for the newsletter >>