Philippa Gregory returns to her Cousins’ War series to tell the story of the woman who found herself between the Yorks and the Lancasters: Elizabeth of York, mother of Henry VIII.

Philippa Gregory is most well-known for her series based in the Tudor courts, but her Cousins’ War series is perhaps her best work since The Other Boleyn Girl. If you are all Tudor-ed out, you must really check out the Plantagenets.

New takes on the Tudors >> 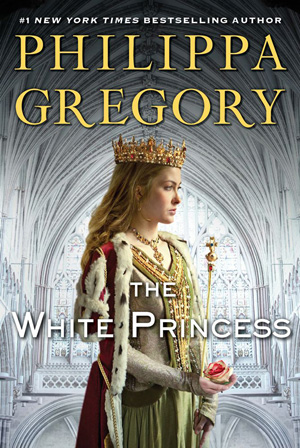 About The White Princess

Elizabeth of York was born a princess, feted by English nobility and foreign dignitaries alike. She had a bright future as queen to a foreign king, but all of that ended when her father died.

Initially, it seemed her life might continue when her younger brother took the throne, but almost before her father’s death had sunk in, her uncle Richard had seized power and before long both of her brothers disappeared from the Tower of London.

Strange as it may seem, Elizabeth fell madly in love with the man who usurped her brother’s throne, her father’s brother, Richard III. Unfortunately, Richard is dead now, too, killed by Henry Tudor, a Lancastrian pretender to the throne, and the man to whom Elizabeth is betrothed.

Elizabeth is valuable to Tudor as he tries to win the hearts and minds of the country he has conquered, but he is not the man she loves and she is not sure whether or not she could ever love him.

The Wars of the Roses reads >>

The one bright spot for Elizabeth in this political marriage is her ability to provide for her family, to help keep the Yorks on the rise. What she doesn’t realize is how much being the queen of a Tudor regime will divide her loyalties. When push comes to shove, who will she back? Will it be her mother and her brothers, who may or may not still be alive, or her husband and their son and heir?

The White Princess builds a good deal on the previous books in the Cousins’ War series. It is not necessary to have read the other books, but if you are not already familiar with the history it might be helpful to read them in roughly chronological order. We recommend: The White Queen, The Red Queen, and The Kingmaker’s Daughter, with The Lady of the Rivers coming either before The White Queen or after The Red Queen.