Jennifer Lawrence and Josh Hutcherson appeared at Comic-Con this weekend to debut the official trailer for The Hunger Games: Catching Fire. Spoiler alert: The movie is going to be amazing. 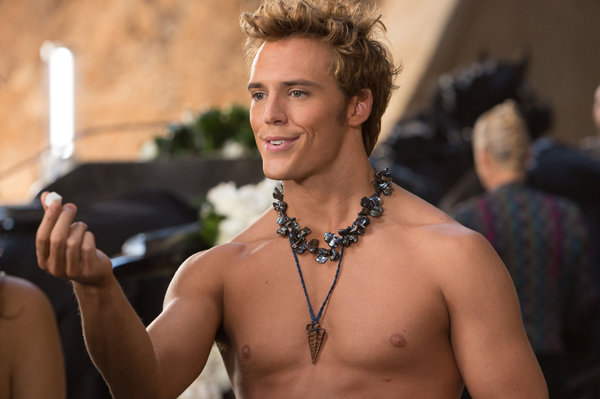 These next few months better go quickly, because we’re not so sure we can wait to see The Hunger Games: Catching Fire, especially after getting a look at the film’s official trailer.

“She’s struggling from post-traumatic stress from the games, and she kind of has a new life where she never has to worry about food anymore,” Jennifer Lawrence said at Comic-Con of Katniss Everdeen’s evolution from the first film.

Julianne Moore in talks to join The Hunger Games cast >>

“She’s living in Victor’s Village, and that kind of leaves her feeling useless in an odd way. She has to kind of adapt to this new life,” she added.

“It was so fun, because Josh and I could just swim in the water, or like, pee any time you want,” Lawrence told the Comic-Con crowd over the weekend. “Anytime you have to pee you can just run right in the water. It was amazing, because the water was really warm, and Hawaii is great. I love working in the water.”

And the much-anticipated lip-lock between Katniss and Peeta? It wasn’t exactly romantic.

“Oh my god, we should’ve brought that clip with the snot… Just because the snot scene (probably) won’t make the final cut doesn’t mean you won’t get a chance to see the disgusting glory for yourself,” Lawrence joked of the kiss. “I’ll put it on YouTube or something. You gotta see it. There’s all this snot coming out of my nose, and when I go to kiss Josh, it connects with his mouth.”

“There was a kiss and there was slobber, and the slobber sort of got connected to my face,’ Hutcherson confirmed.

Pretty sure he loved it.

Are you excited for The Hunger Games: Catching Fire?