Having portrayed a queen herself, actress Helen Mirren has some royal baby name suggestions, and she hopes the royal baby will be a girl.

The world is watching with bated breath as Kate Middleton is in labor and celebrities all over the world have been have been tweeting their support. The latest to join that list is Dame Helen Mirren. 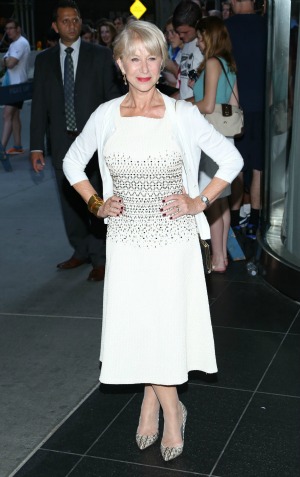 The palace confirmed in a statement that Kate was, “in the early stages of labor” and said that “things are progressing as normal.”

Dame Helen Mirren, who has won an Academy Award for her portrayal of Queen Elizabeth II, has commented on the pressure and the attention that the Duchess of Cambridge must be going through during her pregnancy.

“That’s weird, isn’t it, everyone knowing when you’re in labor,” she stated in an interview with Press Association. “That must be so uncomfortable.”

Having portrayed a queen herself, the 67-year-old actress continued, “We need more queens in our life.”

Not to be left out of the baby name suggestions, Mirren is a firm believer that the royal baby will be named something traditionally British. “It would be nice to have one of those ancient Anglo-Saxon names,” Mirren said.

The actress went on to say, “Her second name will be Elizabeth, without a doubt.” Well, that is if the royal baby happens to be a girl — unless Dame Mirren knows something that we don’t?

The Red actress also said that the name Caroline “would work,” in honor of Kate’s mother, Carole, and that Charlotte or Victoria could also be possible name choices.

She added, “‘And it’s quite valuable to have the courage and the confidence to say, ‘No, f*** off, leave me alone, thank you very much.'”

The world still waits to find out whether there will be a baby Prince or Princess of Cambridge. What are your predictions?