Hear ye! Hear ye! While you’re waiting for Will and Kate’s little bundle of joy, why not take a look at this one? 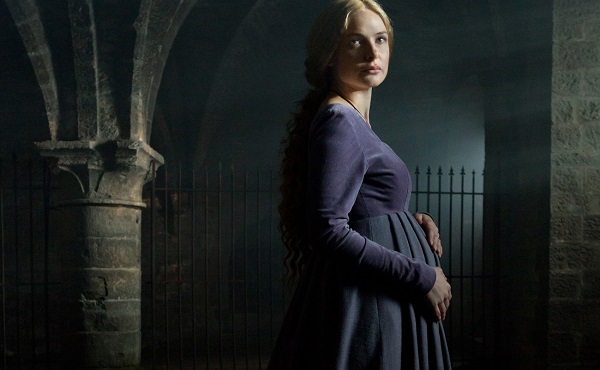 You know, Kate Middleton isn’t the first commoner to marry into the royal family. It’s been happening for centuries. As a matter of fact, STARZ’s The White Queen will follow yet another commoner-turned-royal, Elizabeth Woodville. The show premieres in August and, just like Kate, Elizabeth is expecting an heir.

More about The White Queen >>

There are some massive differences between the two pregnancies, though! Most important, of course, is that Kate and Will are lucky enough to know that no matter the gender of their little royal, it will have a place on the throne. Queen Elizabeth (Rebecca Ferguson) wasn’t quite so lucky, though. In order to secure her husband’s lineage on the throne, she had to produce a boy. You can bet there was a whole lot of praying going on in the castle for at least nine months!

Even in the 15th century, royal babies were all anyone could think or talk about. Take a look.

Gregory writes about directly after the War of the Roses, too >>

Just because Queen Elizabeth had those fabulous frocks and that handsome hubby, things weren’t necessarily easy. Elizabeth only dated that stunning man for three weeks before they were married. Now she’s carrying a baby and, while now it’s generally expected that fathers be supportive during pregnancy, that wasn’t the case back then. Elizabeth was mostly in the hands of her maids and advisers. And, let’s not forget that epidurals didn’t exist during her time, either. (Cringe.)

We can’t predict whether Prince William and Duchess Kate will have a boy or girl. However, history buffs (and Philippa Gregory fans) already know the gender of Queen Elizabeth’s firstborn. Do you know that she went on to have 11 more children by the time she was 43? Talk about a baby machine!

Keep it here to keep up on the royal baby… and on all the latest from The White Queen! The show premieres on Aug. 10 at 8/7c on STARZ.