Kelly Rowland may not be heading back out to the ocean any time soon after a recent dramatic ordeal that left her and her friends lost at sea. 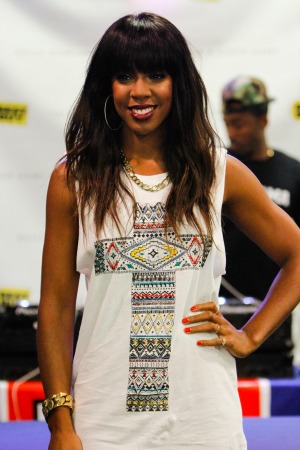 Former Destiny’s Child singer Kelly Rowland encountered a rough time at sea on Friday when she was left marooned off the shores of Provincetown, Massachusetts. Rowland rented a private vessel to enjoy a day of sightseeing with her four friends.

The group had originally set sail for a day of whale watching before their vessel became “disoriented in the 5-to-6-foot waves and fog that had rolled in,” an employee at TowBoat U.S. Provincetown confirmed to E! News.

“The U.S. Coast Guard was able to triangulate their position, after learning that the group needed help,” the employee said.

A similar report was made to WickedLocal.com, which said, “[They] became disoriented in the gusty winds and high seas along with the haze, which lowered visibility. The group was able to establish contact with the Coast Guard.

TowBoat U.S. Provincetown was able to escort the five back to Provincetown, arriving around 10:30 p.m. All were wet and tired — and probably seasick — but otherwise unharmed.”

Scary stuff for the “Survivor” singer, who was rescued after the 12-hour ordeal. However, Rowland decided to cheer herself up the following day with some retail therapy in Provincetown, Us Weekly reports.

Rowland shared photographs of her trip with fans and friends via Instagram and mentioned what a wonderful time she had been having.

Her pictures included a snap of The Little Red, a local store with a sign that read, “Best store ever! Love & Happiness.”

She captioned the photograph, “Loving P-Town!!!!!! The happiest place on Earth!”

At least the The X-Factor judge managed to turn her nightmare at sea into a positive outcome, which is one of the reasons we love Rowland!

Meanwhile, the singer recently revealed she would love to reunite with her Destiny’s Child band mates Beyoncé Knowles and Michelle Williams, saying, “If the ladies want to do it, I’d be totally excited.”

Rowland’s new song “Dirty Laundry” is rumored to be about her jealousy of Beyoncé, although the singer has adamantly denied these rumors.

”It’s so sad that people always go straight to that place. It’s ridiculous,” she said. “It’s basically about me going through some struggles in my life while she was doing her thing. She was proud of me and thought the song was incredible.”