#TheGreatKateWait is almost over: The palace confirms the duchess has checked into St. Mary’s Hospital to give birth! 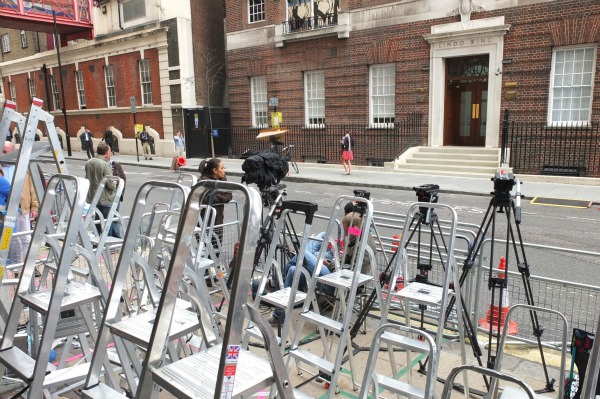 ZOMG ZOMG ZOMG ZOMG! It’s really, truly, finally happening! Kate Middleton is in labor and will give birth to the royal baby at any time!

The palace confirmed that the duchess is in labor and has checked in to the same hospital where Prince William was born, after a photographer leaked on Twitter that he spotted her entering the building.

Her Royal Highness The Duchess of Cambridge has been admitted to St. Mary’s Hospital, Paddington, London in the early stages of labour.

“Her Royal Highness The Duchess of Cambridge has been admitted to St. Mary’s Hospital, Paddington, London in the early stages of labour,” read a statement from Clarence House on Twitter.

“The Duchess travelled by car from Kensington Palace to the Lindo Wing at St. Mary’s Hospital with The Duke of Cambridge.”

It is not known exactly how overdue, if at all, the royal baby might be. The palace only confirmed the couple was due in July, while Kate herself let it slip during a public appearance that she was due mid-month.

The Duchess and royal baby — who already has its own royal title — are being tended to by a top medical team, including the queen’s own former OB-GYN, Marcus Setchell, who delivered Countess of Wessex’s two children. The countess, Sophie, is married to Prince Edward, younger brother of Prince Charles and uncle of Prince William.

Once the royal baby is born, he or she will be third in line to the throne behind Prince Charles and Prince William. For the first time in history, if the baby is a girl, she will not be passed over for a younger brother but will ascend to the throne herself, because the Queen has changed the laws of male primogeniture. Our favorite ginger, Prince Harry, will be pushed back to fourth place.