SheKnows tends to stay pretty politically neutral (it’s in everyone’s best interest), but when Michael Keaton and Robocop director Jose Padilha opened up about drones, we knew we had to share. 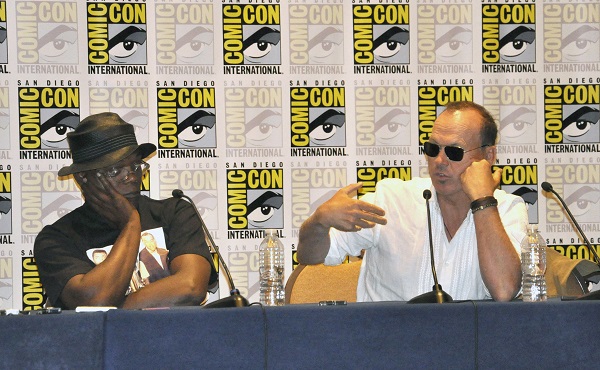 Are you ready for the Robocop remake? We are. And if the ’80s technology, humor and fascist commentary seem too out-of-date to bring back to life? Think again.

“The original Robocop tonally was very ironic and very violent, and also a critique of fascism,” Padilha said. “It dealt with concepts that maybe not everyone caught on to. The relationship between fascism and robotics is very close. Like, the war in Vietnam ended because soldiers were dying; if you picture that war with robots, then there wouldn’t be the same pressure at home. The issue is now posed by drones. Our movie is about that — that’s one part of it.”

Batman Michael Keaton expanded on the issues, though, and he wasn’t afraid to bring his politics to the forefront.

“It’s a very current theme,” said Keaton. “It’s a hugely entertaining film, while underneath it’s discussing relevant ideas, but not to the degree that your brain will hurt going home. When there’s smart added to the fun, it just ratchets things up exponentially. There’s a moral aspect to these robots, and I think that issue is underlying it.”

Padilha added to the thought-provoking discussion by raising a valid point: “Once you replace man with autonomous robots, accountability goes out the window. Say you have a robot hunting drug dealers and it shoots and kills a kid — whose responsibility is that? That’s going to be more and more the issue as robotics evolve.”

Want more entertainment news? Sign up for our newsletter! >>

Kind of terrifying, right? Don’t worry, though. Samuel L. Jackson brought the mood back up a notch when he teased about a less politically charged trailer. (He knows what sells!)

“We’re not going to put that in the trailer, though! We’re going to put the excitement in there,” Jackson said. “And then when people come out they can tweet and say, ‘Damn, that was morally intelligent!'”

If the political commentary isn’t enough to pique your interest in the new Robocop, here’s another interesting tidbit: The man behind Robo, Joel Kinnaman, is delicious. Enjoy the action!