After years of turmoil over the end of their marriage, both Elin Nordegren and Tiger Woods have moved on. The former model even approves of Tiger’s girlfriend. 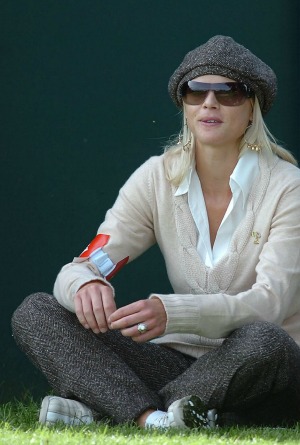 As the old saying goes, “Time heals all wounds.” That appears to be the case with Elin Nordegren and Tiger Woods after their contentious divorce. According to the New York Post, the golfer’s ex-wife approves of his new girlfriend, Lindsey Vonn.

A source told the paper that the former model “really likes Lindsey and thinks she is a very good influence on Tiger.” She also thinks that Woods “seems happy with Lindsey, and she gets on well with their children.”

Vonn and Woods have been officially dating since March, when they made an awkward announcement on Facebook with a few professional portrait shots. The athletic couple met at a charity event in 2012.

Nordegren has moved on after her husband cheated on her with dozens of women in a scandal that rocked the sports world in November 2009. The former husband and wife had two children together during their marriage.

It’s nice to see everyone happy, with Woods in a stable relationship and his ex-wife dating coal-mining billionaire businessman Chris Cline. She’s also currently building a $12 million dream home in North Palm Beach, Florida, with some of her $100 million divorce settlement.

Tiger Woods: Lindsey’s secret to being a PGA first lady >>

While the legendary golf pro appears content with the Olympic skier, he doesn’t have to worry about Vonn giving him an ultimatum when it comes to marriage.

The 28-year-old, who divorced Thomas Vonn in 2012, admitted to Vogue magazine in its August issue, “No, thanks! I am definitely not getting married. To anyone.”

Vonn is currently rehabbing her injured knee in preparation for the 2014 Winter Olympics in Sochi, Russia.

Perhaps Elin Nordegren will be there to cheer her on.