Deb plans a killer crash course for Dexter. And just when we thought she might be back to her lovable, f-bomb dropping self. How long can we hold out hope those days will return? 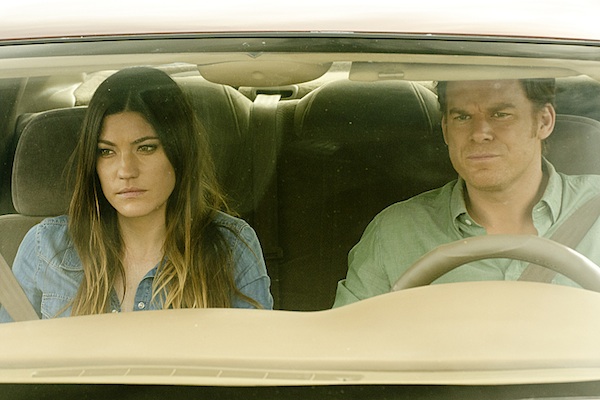 Let us sum up the episode (let’s be real) the season of Dexter so far: Deb’s not better. She’s better! Nope. Not better. Wait, she’s all better! Um… definitely not better.

Is this the rock bottom Evelyn keeps talking about? Because we can’t take much more either.

The killing room is coming

Evelyn is working with Deb (Jennifer Carpenter), but tries to prepare Dexter (Michael C. Hall) for the potential that Deb may not want a relationship with him anymore. Dexter refuses to accept that possibility, which causes Evelyn to ramble about the validity of Dexter’s emotions again.

Evelyn won’t give up on Deb, even showing her the video meetings with Harry to prove that Deb isn’t alone in questioning her morals when looking at Dexter.

Back on the case, Dexter is still checking Evelyn’s journal for potential killers. He watches a man named Yates who has a scar along his skull with no clear explanation for its cause.

Dexter confronts Evelyn about Yates’ scar. Evelyn confesses she saw a lesion on Yates’ brain when he was a patient that she found suspect, but she never knew if he had it taken care of. She says it was an oversight but was it really? It seems a little suspicious to simply be an oversight.

Dexter investigates Yates’ house and finds women’s shoes. Either he’s into drag beauty or he’s collecting them for more sinister purposes. Just guess which is correct.

Yates is watching everything from a secret room in his house via cameras. In his secret room, Yates is holding a woman hostage.

A woman for Masuka to respect

Quinn passed his sergeant exam with flying colors and Batista takes him out to celebrate. Quinn overhears an officer making fun of Deb and confronts him, which leads to a bar fight. Batista is just able to remedy the situation, and Jamie takes Quinn from the bar. She is jealous of Quinn’s connection with Deb.

The next day at the station, the chief tells Batista he wants Angie as sergeant instead of Quinn.

A girl named Niki shows up at the station to talk to Masuka, which he takes as a booty call. Instead, the girl admits she thinks he’s her father. She even has the same creepy laugh! 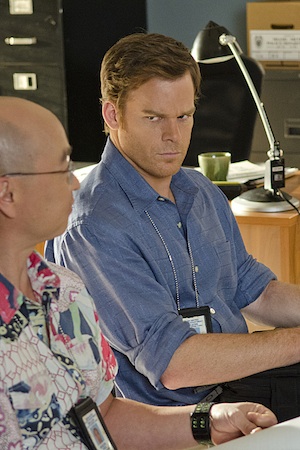 Evelyn is out of the club

Evelyn takes Deb back to the trailer with more psychobabble to help her PTSD. The point is that given the option of a do over, Deb would still choose Dexter. She will always choose Dexter. It finally seems like Evelyn’s getting through to Deb.

Dexter finds matches to three missing women from the shoes in Yates’ apartment.

Dexter goes back to Yates’ house and finds the hideout. He finds brain surgeon charts, specimen jars and a woman locked in a cabinet with a stab wound. She’s near death, but Dexter has her dropped at a hospital so she doesn’t die.

Dexter finds Evelyn’s notes on Yates’ computer, including information about himself. In the notes, Evelyn says there are no real emotions behind Dexter’s feelings for Deb. Dexter feels betrayed and like a measly lab rat. Dexter says once Yates is dead, he wants Evelyn out of his life.

Deb devises her own code

Deb snoops through Evelyn’s CDs and finds another video of Evelyn’s sessions with Harry. In the video, Harry says no one deserves to be in pieces like Dexter does in his killing room. He is unhappy with the code and doesn’t think he can live with himself. Deb doesn’t know how she’s supposed to if Harry couldn’t.

Deb goes to see Dexter but runs into Quinn. He admits that things are easy when he’s with Deb. She tells him to make it work with Jamie because she wants him to be happy. Quinn is worried Deb still isn’t OK, even though she looks so much better.

Deb asks Dexter to take a ride with her so they can talk. When Dexter wants the reassurance the two of them will always be together, she doesn’t give him an answer. Instead, she tells him about the videos.

Dexter admits Harry OD’d on his heart medication. Deb says she thinks she understands why Harry killed himself, but he only got it half right. Then Deb grips the wheel and spins the car out of control into a lake. A fisherman sees them and rescues Deb from the car first. When Deb sees Dexter sinking, she realizes her mistake and goes back in the water to save him, bringing his body to the surface. Will this be enough to set her on track again?