Jennifer Lawrence’s role in The Hunger Games: Catching Fire had her in the water a lot, and she loved the freedom the ocean around Hawaii gave her — maybe a little too much. 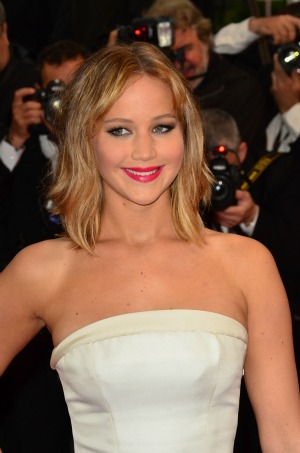 The first sequel to one of the most popular movies of 2012 is coming out in a matter of months, and the cast showed up at Comic-Con in San Diego.

The Hunger Games: Catching Fire is the second of three books (but four movies) in the series, and the second trailer for the new movie was released over the weekend.

Julianne Moore in talks to join The Hunger Games cast >>

Water plays an important role in the story, and the cast of Catching Fire spoke at length about shooting the water scenes. Despite the challenging nature of shooting scenes in the water, this cast seemed to enjoy the work because of the Hawaiian shooting location. Plus, those scenes allowed Jennifer Lawrence — who plays main character Katniss Everdeen — to be exactly who she is.

“It was so fun, because Josh [Hutcherson] and I could just swim in the water, or like, pee any time you want,” Lawrence told Yahoo! Movies. “Anytime you have to pee you can just run right in the water. It was amazing, because the water was really warm, and Hawaii is great. I love working in the water.”

The costumes worn in those scenes ended up being perfect for the movie. Producers of other films with water scenes, like Titanic, had to constantly worry about their actors developing hypothermia. But the book this movie is based on has the characters in wet suits, so the producers didn’t have to work hard to make sure the cast was safe and warm.

However, another scene gave Lawrence some trouble. The actress explained that she had a problem with a wedding gown she wore in one scene — a problem similar to one she had at the Oscars, where she tripped walking onto the stage.

“Now the world knows how bad I am at walking in giant gowns,” Lawrence told Yahoo! Movies. “That dress was incredible. It was like five feet in circumference, and I had to walk up a ramp in the scene. So there’s this hilarious outtake of me walking and just getting lower, lower, lower, and then poof!”

Fans can watch Katniss Everdeen again, along with the rest of the characters, in The Hunger Games: Catching Fire when it comes out in theaters Nov. 22.