Stacy Keibler is known as “The Legs of the WWE,” and she reveals insider secrets to her long and lean legs. 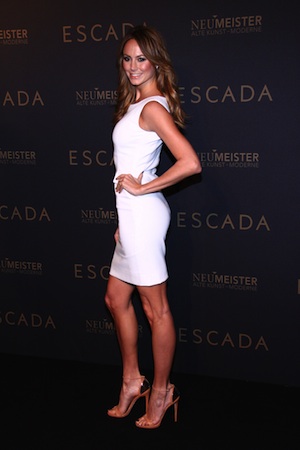 Stacy Keibler is known for her long and lean legs. Keibler  — a  5-foot-11-inch former WWE star and Maxim favorite — constantly shows off her super-toned legs on red carpets and in television appearances. And now the famous ex-girlfriend of George Clooney just confirmed her million-dollar gams are likely worth several million dollars.

Stacy Keibler vanishes from Twitter after split from George Clooney >>

A fan of Keibler’s, Shannon Owens, wrote to the Huffington Post to ask Stacy just how valuable her legs are.

Wrote Owens, “Miss Keibler, you have some of the greatest legs I’ve ever seen! lol Would they happen to be insured for any amount?”

Stacy Keibler did not hesitate to respond, saying, “They are insured, actually. They’re insured. Yes.”

Abby Huntsman, a Huffington Post producer and host, followed up with Keibler and asked her how the process of insuring a body part works.

“You have to go through physical and lots of paperwork,” explained a smiling Keibler. She added nonchalantly, “It’s something I did a long time ago.”

Stacy Keibler’s WWE nickname? “The Legs of the WWE” >>

Insuring a body part, like a pair of legs, is often a challenge because it’s a specialized form of disability insurance. Sarah Mills of MSN Finance explained that celebrities also insure body parts as a form of publicity.

“Celebrities of course have a clear incentive to take out body parts insurance,” Mills said. “The publicity alone arising from such a deal can easily pay for the premium, sometimes even the pay-out. It’s also a great way to remind fans exactly what it is about a star that they love: a great tush, stunning legs, even a smile. The body part becomes synonymous with the brand.”

Despite Stacy Keibler’s leg insurance — although she won’t say how much they’re worth — it’s obvious she works extremely hard to keep her killer legs in prime form. In early 2012, Shape magazine spoke with Stacy Keibler and Keibler’s personal trainer, Juliet Kaska, about some of their insider secrets to enviable legs.

“Juliet has a gift of hyper-focusing on each muscle to make them ‘pop’ perfectly, keeping my legs long and lean,” said Stacy.

Her trainer elaborated, “Stacy was born with stunningly long, athletic looking legs. But my job is to work on sculpting them so that she has more muscle definition and shapely calves.”

Kaska said Keibler regularly runs up several flights of stairs throughout the week and mixes in high-intensity hiking with ankle weights for “added resistance.” Juliet says that as long as Keibler doesn’t hit a workout plateau, her legs will continue to be one of her most valuable assets, with or without insurance.

Way back in November 2008, Stacy Keibler told Maxim her gorgeous legs measured in at 41 inches long, and she revealed that finalizing the insurance policy on her legs was extremely difficult.

“I feel like it’s as hard as buying a house,” Keibler said. “Like, you have to get a loan for your body.”