Kirk Cameron sure knows how to ruffle feathers. His latest venture is a new film about his faith. The trailer was banned from Facebook and YouTube, but is it really controversial? 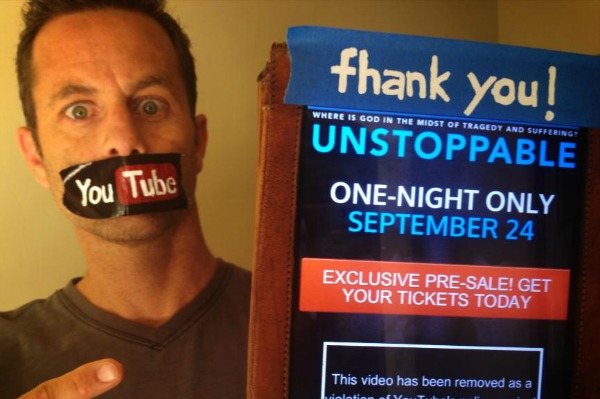 Kirk Cameron is at it again. The trailer for the controversial celebrity’s latest venture, Unstoppable, was banned from Facebook and YouTube.

The clip starts with a close-up of the former Growing Pains star asking, “Why does God let bad things happen to good people?…That is the question that wrecks people’s faith.”

He shares, “This the most personal project I have made regarding my faith.”

The trailer uses dramatic music and strong images to help get the message across. Cameron’s film is designated as a one-night-only event on Sept. 24 at Liberty University in Virginia as well as at select theaters around the United States.

The ban on Facebook happened because users deemed the content in the trailer “abusive,” “unsafe” and “spammy.” On YouTube, the trailer was labeled “spam,” “scam” and “commercially deceptive,” the 42-year-old reported on his Facebook page.

With help from his fans, Cameron was able to get the trailer reinstated on both social media sites. However, the ban and the reinstatement spoke volumes about the how divisive Cameron is as a public figure.

His positions on gay marriage and homosexuality and his support of former U.S. Rep. Todd Akin after his rape/pro-life comments have left him with fewer fans than he had during his ’80s heartthrob days. While many of his conservative Christian followers applaud his views, many in Hollywood shun the former actor.

While Cameron does have a right to his beliefs and free speech, sometimes his statements are inflammatory when directed at the industry that first made him famous. His fame gave him a platform to preach his message later in life.

Even if half of the country doesn’t agree with the film, the trailer seems pretty tame for Facebook and YouTube audiences.

Watch the trailer for Unstoppable.