You’re Next is an all-new kind of horror movie: one where the girl isn’t the screaming victim. This time, the chick is the hero who saves the day. 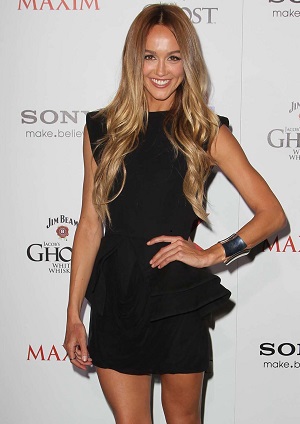 Whether you’re a horror fan or not, you’ll enjoy You’re Next. At least, Sharni Vinson thinks so. And what’s not to like? It’s a horror film where the bad guys actually kill for a reason, not just because they’re evil or insane. And the hero? Well, she’s a complete BAMF.

“Everything Erin [her character] embodied in this script when I initially read it was everything I not only felt like I wanted to see in a movie but believed a female should be,” Sharni told SheKnows during Comic-Con.

“So, I wanted to have the opportunity to be the girl who could portray this girl for the benefit of other people. And I think the response we’re receiving right now from the female audience is just brilliant.”

In You’re Next, Erin is attending a family reunion with her new boyfriend and his family when everything goes haywire. Suddenly, the entire family is trapped inside their vacation home by rampaging murderers wearing animal masks.

Sharni’s next! 5 Big stars who started out in horror films >>

“I knew it would go down well with men, as it always does with the horror audience, but this one is specifically for females, too,” the actress told us.

As for why Erin is so tough… We don’t want to give away too much or spoil it for you, so we’ll just leave it at this: It has to do with the way she was brought up.

So, what’s up for Sharni now? Her schedule is pretty light, but she’s glad about that. She seems dead set (pun intended) on promoting the awesome You’re Next and helping to secure the viewers and fans it deserves.

Want more on movies, TV or Comic-Con? Sign up for the newsletter, girl! >>