It was a Modern Family–filled weekend for Jesse Tyler Ferguson as he tied the knot with his longtime love, Justin Mikita, in Manhattan on Saturday. 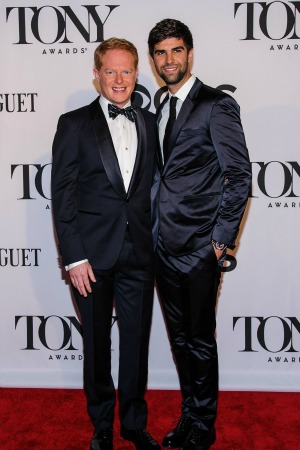 Even though Modern Family is on hiatus until the fall, several of the cast members joined together to celebrate a wedding — that of Jesse Tyler Ferguson to his longtime partner, Justin Mikita.

According to Us Weekly, the Manhattan event was a star-studded affair. Over 200 guests were invited to the ceremony at 82 Mercer. Celebs in attendance included Julie Bowen, Ty Burrell, Rebecca Romijn, Cat Deeley, Eric Stonestreet and Jerry O’Connell.

The rehearsal dinner on Friday at Harding’s restaurant was also an elegant affair. A source told the entertainment magazine that the room was filled with sunflowers and atmospheric lighting with “tea candles and chandeliers.”

The source revealed, “There was a lot of laughter.”

The couple have been dating for two years. They got engaged in Mexico in September 2012 when the 37-year-old actor proposed to Mikita.

Together, the duo founded the nonprofit organization Tie the Knot, which aims to “advocate for the civil rights of gay and lesbian Americans throughout the United States and to look damn good while doing it.” The organization sells seasonal neckwear, with proceeds benefiting gay and lesbian charities.

The newlyweds specifically chose the Big Apple for their wedding because gay marriage was not legal in California when they were in the planning stages.

As Ferguson explained to Us Weekly in March, “We wanted to get married in New York, because that’s where it’s legal, so we want to support the state that’s in support of us.”

The Modern Family star has double the reason to celebrate this week. He’s a married man — and he was nominated for his fourth Emmy on Thursday.