Sylvester Stallone and Arnold Schwarzenegger just can’t shake each other. The actors are good friends but also competitors. Find out how and why they keep each other on their toes. 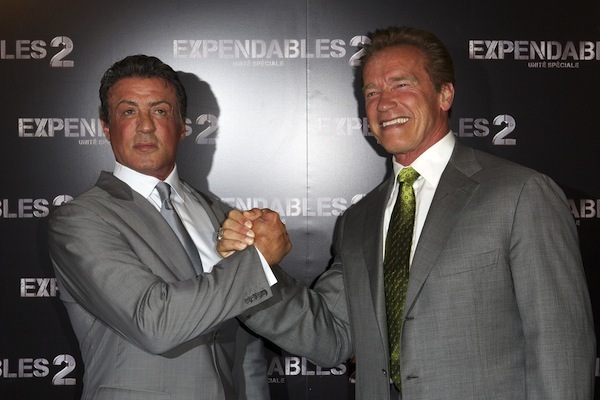 Over the past few years, Sylvester Stallone and Arnold Schwarzenegger have reignited their friendship. Both actors rose to prominence in the ’80s with their action-heavy films. It’s no secret that they were each other’s biggest competition. However, they’ve recently shared the screen in The Expendables films as well as the upcoming Escape Plan.

The Expendables blows away the competition >>

The duo recently appeared at San Diego Comic-Con to promote the film, and they spoke about their real-life rivalry. Despite being co-stars, they still try to one-up each other.

The feeling is mutual, as Schwarzenegger revealed their competitive spirit is alive and kicking.

“That’s part of it, to play tricks on each other,” said Schwarzenegger. “That’s what makes it fun. But when we were on the set and when we were shooting, it was serious business. And you can imagine how competitive Sly is.”

Whew! We just had flashbacks of them as Rambo and Commando. Between those two, there was never a shortage of tank tops and baby oil.

You can see Stallone and Schwarzenegger in Escape Plan, which opens in theaters Oct. 18.