ZOMG! Kate Middleton might finally be ready to give birth. Keep checking back as we update the latest details on the arrival of the littlest royal as soon as they happen!

The Prince of Wales talks about the royal baby

Prince Charles on his new grandson:

Both my wife and I are overjoyed at the arrival of my first grandchild. It is an incredibly special moment for William and Catherine and we are so thrilled for them on the birth of their baby boy.

Grandparenthood is a unique moment in anyone’s life, as countless kind people have told me in recent months, so I am enormously proud and happy to be a grandfather for the first time and we are eagerly looking forward to seeing the baby in the near future.

The official easel announcement is placed outside Buckingham Palace: 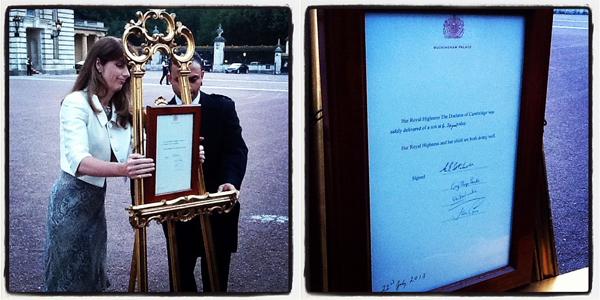 Kensington Palace have now confirmed that the birth of the baby will be announced via press release. I think the baby is on the way, but the announcement won’t come till after 9:30 p.m. I just checked with Kensington Palace and they said that the easel malarkey has been canned. They are going to send out a press release to emails of people like me instead. But what if the baby comes tomorrow? I asked. It was pretty clear from the tone of voice that wasn’t likely.

The Queen goes to bed at 9 p.m. but stays up till midnight on special occasions like Christmas. So I reckon the baby will be announced between 9 p.m. and midnight.

Royal baby birth announcement coming in the next few minutes?

Who will deliver the royal baby news to Buckingham Palace?

Also, a royal source just told Us Weekly that the Middleton family has not yet arrived at St. Mary’s hospital.

Carole and Pippa Middleton won’t be in the delivery room

Some moms-to-be want the delivery of their baby to turn into a family affair. Not Duchess Catherine: she only wants William in the room, according to NBC News.

“Buckingham Palace denied rumors that they were going to be in the delivery room with Kate. She very much wants just her husband to be there,” the network’s royal expert, Camilla Tominey, said Monday.

Queen Elizabeth is back at Buckingham Palace

Queen Elizabeth’s flag was just raised outside Buckingham Palace, indicating that she’s back from Windsor Castle in Berkshire. 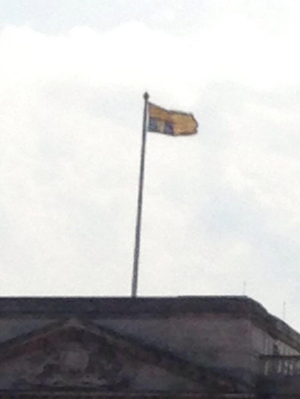 We’ll first learn of the royal baby’s arrival via an easel placed outside the gates of Buckingham Palace. Then, royal officials will release the information via the Clarence House Twitter account.

Kate is in labor!

Kensington Palace confirms that Duchess Catherine has entered St. Mary’s Hospital in London and is in labor. Not long now!

So-called “well-placed” sources inside Buckingham Palace told the U.K. Telegraph that Kate’s due date was actually July 19, which explains why the royal couple left her family’s home on that day.

If nothing happens, it’s likely St. Mary’s Hospital physicians will induce the Duchess of Cambridge to keep both mom and baby healthy.

“She will be given a choice of dates so she can choose when is most convenient but the longest they would wait would be a week,” a source told the newspaper.

That means we might have another few days of waiting. Sigh.

William and Kate are waiting this thing out at Kensington Palace

Things are close, but not that close. According to People, the couple left Bucklebury, about 55 miles west of London, on Friday to wait out the final hours of Kate’s pregnancy at Nottingham Cottage, within the grounds of Kensington. The palace is close to Lindo’s Wing of St. Mary’s Hospital, where Kate is expected to give birth to the royal baby.

Are Kate and William punking us?

No one has spotted the royal couple at St. Mary’s Hospital in London — and there might be a reason for that! According to the U.K. Telegraph, she might have instead opted to head to Reading Hospital.

“It is still a possibility that she could give birth there, though that would only be in extremis, as the expectation is that she will go to St Mary’s,” a source told the newspaper.

When the baby does come, the official notification will only come between 8:30 a.m. and 10 p.m. London time. As we previously reported, the official announcement will be made on an easel in front of Buckingham Palace and via the official Clarence House Twitter account.

Several sources are reporting that the announcement will also be made on the 600-foot BT Tower in London.

“As one of London’s best-loved landmarks, it’s only fitting that the BT Tower should celebrate when the city celebrates,” Suzi Williams, director of group marketing and brand at BT, told the Daily Mirror. “Since the LED screen at the top was first installed back in 2009 it has counted down from 1000 days to the start of London 2012, and commemorated the Royal wedding and the Diamond Jubilee.

“We’re excited to be sharing news of the royal birth too.”

Poor Lupo gets head stuck in a gate 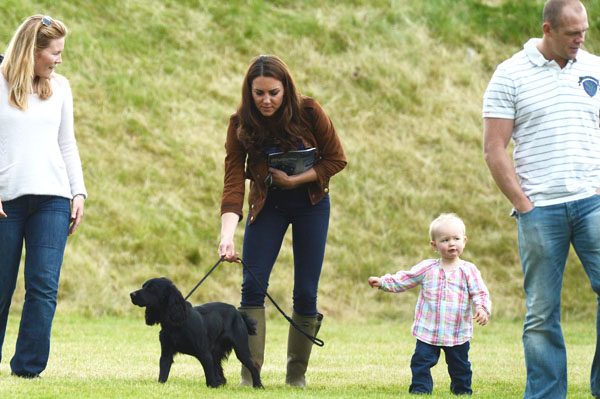 It sounds like Lupo, the royal couple’s nearly 2-year-old dog, wanted to head back to London with them: The cocker spaniel reportedly got his head stuck in a gate outside the Middleton’s Bucklebury home, according to the U.K. Daily Mail.

“Soon after [I] heard a high-pitched scream which sounded like a dog is distress,” photographer Greg Blatchford said of seeing a dog stuck near the family manor. “I presume that was when they were pulling the poor animal out from between the bars of the gate.”

Royal Berkshire Fire and Rescue Service confirmed they were called out to the home.

“We were called to an animal rescue. The special unit from Reading was despatched along with an appliance from the nearest station, Newbury,” a spokesman said. “Our crew got to the manor but were told as they arrived at the gates that the dog, which had got its head stuck, had been freed just a few moments earlier so their services were not needed.”

The important takeaway from this? Kate and William are likely on their way to the hospital and left Lupo in the care of her family… hopefully it’s not long now! 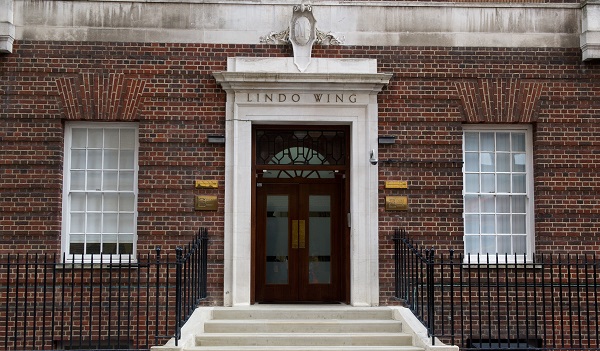 The Duke and Duchess of Cambridge reportedly left the Middleton family home in Bucklebury on Friday morning in quite a rush. They left in either a helicopter or a car, depending on whom you’re asking.

Or, they possibly left in a car-copter, the little known hybrid of a helicopter and a car. Regardless, things are finally getting real. 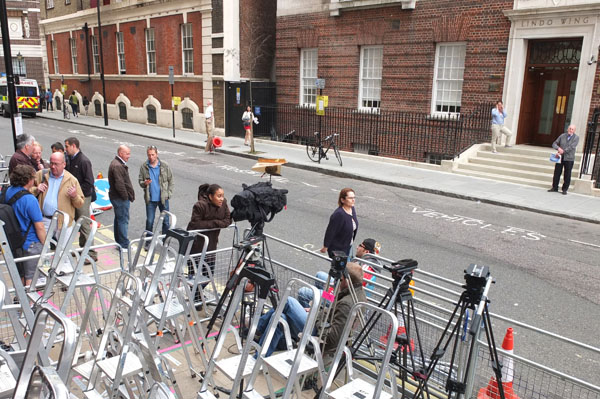 Meanwhile, the photographers who have been staking out the Lindo Wing of St. Mary’s Hospital for several weeks are finally going to start earning their pay. Various livecams perched outside the hospital door will let us know the minute the royal family arrives.

Royal watchers are freaking out

Royal fans have also staked their claim outside the hospital to witness history happen. Some are even bearing “It’s a girl!” or “It’s a boy!” balloons because, you know, it’s good to be prepared. We’re just sad we can’t be there to give Wills and Kate their first pram.

“Royal babies don’t grow on trees,” fan Terry Hutt told the U.K. Telegraph. Of course not! It wouldn’t be so special.

Will Kate Middleton get induced? 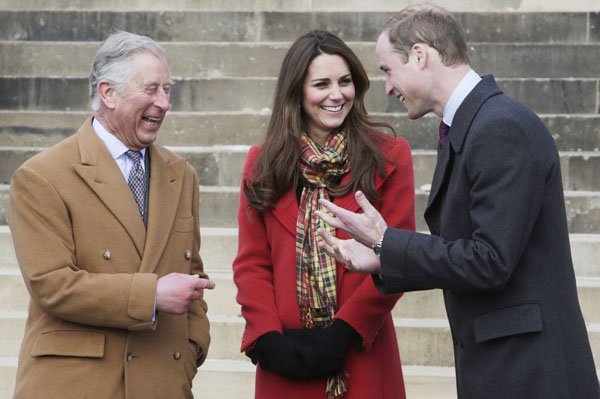 Is the Duchess being induced? It’s possible: Princess Diana reportedly told journalist Andrew Morton that she was induced with William. Diana told Morton that she “had to be induced, because I couldn’t handle the press pressure any longer, it was becoming unbearable.”

“It was as if everybody was monitoring every day for me,” she said.

Something tells us that Kate knows exactly how that feels!