Actress Tamera Mowry recently revealed that she kept her virginity until after she turned 29. 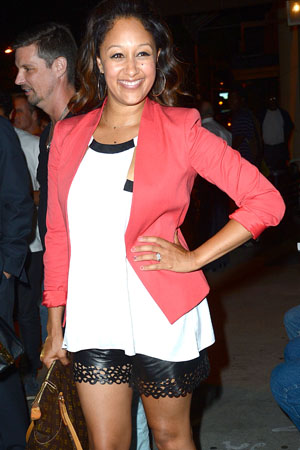 Tamera Mowry grew up in the Hollywood spotlight, but she didn’t fall victim to the typical Hollywood car wash of drugs, alcohol and sex. The 35-year-old recently admitted on NYC’s Hot 97 that it was actually quite the opposite: She kept her virginity well into her 20s!

“I don’t know how to explain this. I’m religious, so I waited until I was 29 to lose my virginity,” the actress revealed. “You may not understand this, [but] I did it, then I felt guilty, then I became celibate until I got married.”

Mowry’s pal Adrienne Bailon — who’s also her co-host on the new daytime talk show The Real — was quick to come to her defense.

“Just because you only had sex with one person doesn’t mean you’re a not freak, and I think that that’s a good thing,” she added in the interview. “I think people think that you could only be a freak by doing it with a bunch of people. You can be a freak and just be a freak with one person. That is beautiful and dope.”

“I think Hollywood could use a few more role models like you,” Allison Holly tweeted.

Mowry is far from alone in her decision to keep her virginity into adulthood. A recent University of Texas study of 1,659 same-sex sibling pairs between the ages of 16 and 29 found that people who waited until an older age to have sex had more fulfilling sex lives than those who lost it at a younger age.

Is there any right age to lose your virginity? No. It’s a deeply personal decision, and no one should feel pressured to do it — or not do it — because of others.

Mowry clearly didn’t let anyone make that decision for her — and it sounds like she’s having fun in her marriage to Fox News correspondent Adam Housley. She recalled an episode of The Real when a sex therapist stopped by to talk all things bedroom.

“Guess who knew everything?” she boasted of her sex knowledge.

Does it matter at what age you lose your virginity?

Wait, we thought Adam Levine was against marriage?
Celebrities and online dating: Who does it, who wants to
Awkward dating situations: Dating a friend’s ex