Julian Assange and his bright hair strikes again! Or at least Benedict Cumberbatch’s version does. The actor stars in the new trailer for the biopic, The Fifth Estate. 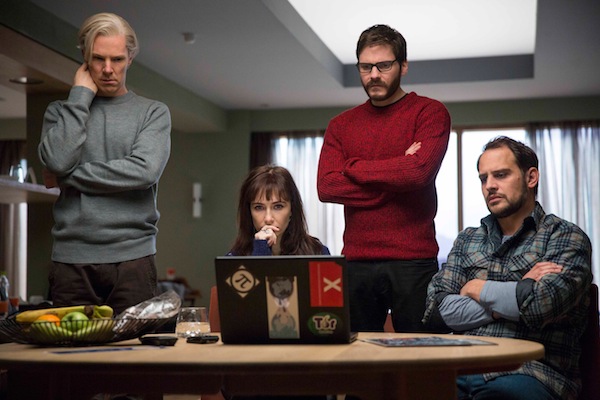 Benedict Cumberbatch goes from Star Trek villain to internet radical in The Fifth Estate. The British actor stars in the biopic, which centers on Julian Assange, the founder of WikiLeaks. Cumberbatch underwent quite a makeover to embody the character. His striking white hair is just the tip of the iceberg.

In the trailer for The Fifth Estate, we get our first taste of Cumberbatch using Assange’s Australian accent. He tries his best to emulate everything about the man. The film follows Assange and his cohort Daniel Domscheit-Berg (Daniel Brühl) as they join forces to expose the rich and powerful.

WikiLeaks’ Julian Assange will drop by The Simpsons >>

What starts off as a small watchdog operation becomes something bigger than they could have ever imagined. With the creation of WikiLeaks, they allowed countless users to publish covert data to the public. The platform is a blessing and a curse as Assange and company become targets themselves.

The screenplay was written by Josh Singer and based on the books Inside WikiLeaks by Daniel Domscheit-Berg, and WikiLeaks by David Leigh and Luke Harding.

Everything looks very serious doesn’t it? The Fifth Estate opens in theaters Oct. 18

What do you think of Cumberbatch’s new look? Will you be seeing the film?