Workaholics and Pitch Perfect‘s Adam DeVine told SheKnows about some pretty intense make-out sessions with Rebel Wilson. Will there be more? 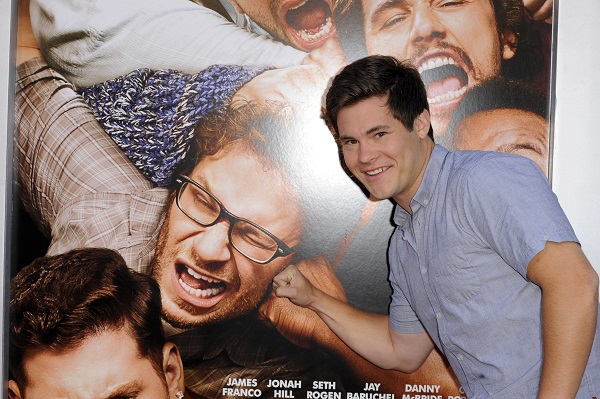 SheKnows had the chance to chat with Adam DeVine while at Comic-Con, and we got the lowdown on Pitch Perfect 2, Rebel Wilson and what the super-cute funnyman is doing next.

So far, he hasn’t heard about appearing in Pitch Perfect 2, but he says he’d love to make a cameo. Maybe Bumper could stop by campus after working for John Mayer.

“I’ve heard through the grapevine that they might throw this dog a bone and let me come in and do a little cameo. But, we’ll see,” DeVine told us. “I would like to. I, literally, had the best time ever shooting the first movie. So, I’d like to come in for like a week. But if it doesn’t happen, that’s fine.”

And heck yeah, he’d be open to seeing Bumper and Fat Amy hook up! From the sound of it, he even happens to enjoy it. He dished on his 50-take make-out sesh with Rebel Wilson when she came for an episode of Workaholics.

“Ohhh, we need a spinoff!” DeVine joked. “We actually have the same agent, and every time I talk to her, she’s like, ‘We need to get you and Rebel in a movie together where you’re love interests,” he said, before talking about the 50 takes of Rebel and him going “tongue-deep.”

“So, yeah. We’re very comfortable with each other.”

Workaholics’ Anders Holm will return to The Mindy Project >>

While DeVine might have nailed the slacker bit on Workaholics and maybe spent a little time screwing around during his time in the phone room, he’s not a slacker anymore!

“The thing about the show is we have to work so hard writing it and shooting it,” DeVine explained. “I can’t be as big of a slacker as I’d like to be sometimes.”

He’s got more up his sleeve, too. DeVine also has a new show coming to Comedy Central, and it looks pretty fun. Adam DeVine’s House Party will be on Comedy Central (eventually). In essence, DeVine has a house party with friends and comedians doing stand-up in the background. What an overachiever!

Whether he meant to or not, DeVine even gave a little advice for wannabe actors.

“I wanted to be an actor and a comedian, and then I kinda started to realize it’s easier to write stuff for yourself and put yourself as a star… Nobody’s gonna look at my hobbit a** and go, ‘This guy is a TV star!’ ya know?”

Fact: Adam DeVine is faaaaaar from a hobbit, and we’re definitely jealous of Rebel.

For more TV news, sign up for our newsletter! >>