Renee Alway resurfaced in 2013, only to make headlines for a tragic spree of drugs and crime. Her third arrest this year comes after a 6-hour SWAT standoff. 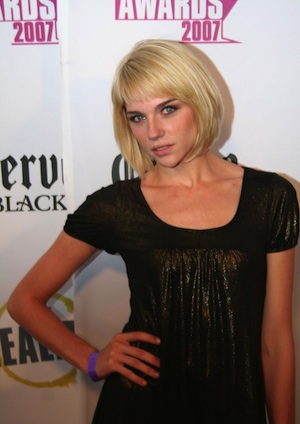 To say Renee Alway is struggling is an understatement.

America’s Next Top Model fans were shocked to see the once-photogenic Alway the subject of an awful mug shot in which the 27-year-old looks beaten and bruised.

Renee Alway was arrested June 28, 2013 in Palm Springs, California after she engaged in a six-hour standoff with police. TMZ reports law enforcement arrived at the scene after bystanders reported Alway was acting suspicious near a vacant home in the area.

The former ANTM finalist refused to cooperate with police, and law enforcement was forced to call the SWAT team.

Alway was booked for possession of narcotics and suspicion of burglary and fraud. She posted bail of $150,000.

To make matters worse, Alway was already on bail when she was arrested in California, which means she could face additional charges. Her earlier arrest stemmed from drugs and theft.

Renee Alway found success as a model in her teens — she was featured in ads for Delia’s, Seventeen, and Vogue — and likely hoped America’s Next Top Model would reignite her career. The Michigan native was a stay-at-home mom prior to joining the cast of ANTM in 2007 at just 21 years old.

While a refreshed modeling career seemed promising after she placed third on Cycle 8, it fell flat. Alway’s only just resurfaced, but this time it’s for something far less glamorous.

It’s not entirely clear what path Alway traveled after the show ended or if she has custody of her son, but her recent arrest and drug spree suggests the former reality show contestant is in some serious trouble.