How many people do you know that do what Justin Timberlake does? I know of one, and that’s Robin Thicke. What happens when they’re pinned side-by-side? Who reigns? You decide! 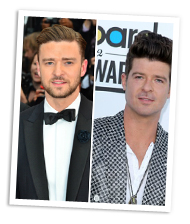 Battle of the R&B Crooners

How many people do you know that do what Justin Timberlake does? I know of one, and that’s Robin Thicke. What happens when they’re pinned side-by-side? Who reigns? You decide!

Years ago, no one could have predicted that Justin Timberlake would have us in Watch the Throne mode, witnessing him work (and seemingly become BFFs) with the likes of megastar mogul Jay Z. (Though their partnership is surprising, it’s not Miley Cyrus–Snoop Lion shocking.)

Heck, a decade ago I feel he was still that bleached-blonde, curly haired cutie, jumping around yelling “Bye, bye, bye.” He was definitely my favorite of *NSYNC (but I’m a Backstreet Boys fan so I truthfully didn’t pay him much mind). Now, he’s a serious threat on the R&B scene, with his comeback album having us all breaking our necks because it’s just that good.

But Justin’s not the only one who can sing that high and look that good. Robin Thicke has been doing his thing for some time now, and subsequently has built up a reputation of his own. While R&B can be an unusually daunting genre to hold your footing in, both Justin and Robin have continued to show immense promise and have delivered hits.

So enough with the compliments ? what do you think, readers? If there was only room for one of these crooners in the music industry, which would you peg as being king? Check out our side-by-side comparison and speak your mind! 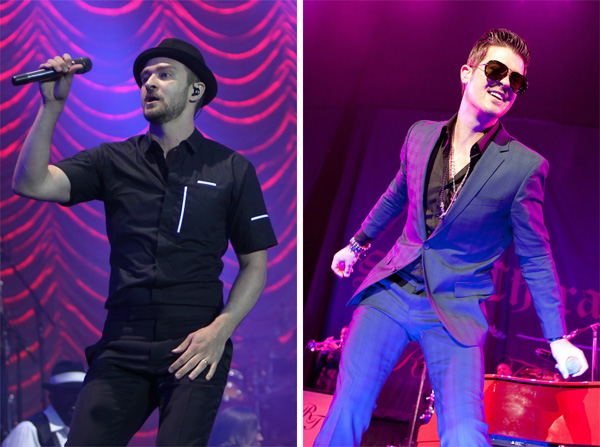 Grammy-winning Justin Randall Timberlake hails from Memphis, Tennessee. Surprisingly, his roots didn’t first start in music ? rather, it was in acting on TV. Though he was considered to be on hiatus for several years, this past decade has still been a good one for him. His voice is youthful and agile, and he can harmonize seamlessly. He’s also been heard beatboxing when not using his falsetto. FutureSex/LoveSounds and The 20/20 Experience were both huge successes. In a letter posted on his website, he mentions he had “no end goal in mind” for his most recent work, but he’s emerged with more respect as a musician than ever. In the past, he’s worked famously with Timbaland, Nelly Furtado, Janet Jackson and 50 Cent (to name a few). His recent collaboration with Jay Z on his album Magna Carta has propelled him into the limelight. When you’re this talented, I suppose it’s no wonder he’s presently facing his 14th single on Billboard‘s Hot 100 Top 10. When Justin isn’t acting in movies, singing or songwriting, you can find him managing business ventures (fashion, alcohol and restaurants, for example) and being a philanthropist. Recently married to Jessica Biel, he manages to also be a husband. Props, Mr. Timberlake.

See what other matchups we create next! Stay updated by signing up for our newsletter! >>

Robin Thicke was born into entertainment, and started a musical career at a very young age. A&E reports he was mentored by Brian McKnight and subsequently worked later with Interscope Records. He has soul ingrained in his DNA, as his influences have been said to be Marvin Gaye and Al Green. His first venture, Beautiful World in 2003, didn’t do so hot, but thanks to direction from Pharrell, Thicke re-emerged with the sensational The Evolution of Robin Thicke. Billboard just revealed that Thicke’s single “Blurred Lines” off of his soon-to-be released Blurred Lines album just won’t quit on the charts, claiming it “matches this year’s longest reign.” When Robin Thicke isn’t collaborating with industry leaders like T.I. and Pharrell, he also makes his share of television appearances on shows like Duets and Real Husbands of Hollywood. Thicke is also very happily married (as often depicted in his interviews) to Mission Impossible IV star and his teenage love, Paula Patton.

So ultimately, you have a tough choice ahead of you, readers! Both are impeccably talented, married to unbelievably gorgeous women (and aren’t too bad themselves), and have an aura that is unparalleled (well, except when compared to each other, ha!). Go on, make your choice!