Kanye West and Kim Kardashian appear to be a happy couple who have just recently welcomed a baby daughter, although rumors suggest Kanye is not yet content… 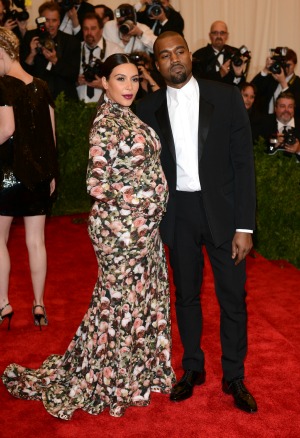 Kim Kardashian and Kanye West have just welcomed their baby girl North West, nicknamed Nori, into the world. It is no secret that Kardashian struggled with weight gain during her pregnancy and received a lot of criticism about her pregnancy wardrobe.

The reality star is also reported to have suffered a traumatic birth, due to developing the life-threatening condition pre-eclampsia.

So it is not surprising that the star would not want to try for baby No. 2 just yet, despite what her rapper boyfriend Kanye West may want.

“At first Kim thought Kanye was joking, as she’s been through such a stressful time in the past few months and she’s only just started to feel herself again. As soon as she realized he was serious, it sparked a spat,” a source revealed to British magazine Star.

“Kim reminded Kanye how she had faced a horrific ordeal with Nori. She feels if he was any kind of supportive partner, he would realize how difficult that had been for her, and he would wait until she’d regained her confidence.”

Kardashian does not seem convinced she will make a good mother and is still trying to learn how to be a parent. She is apparently seeking help and advice with baby North from her sister Kourtney, who has children Penelope and Mason with her longtime boyfriend Scott Disick.

“She wants time to get to grips with motherhood — she’s still struggling to breast-feed — and to enjoy her first precious months as a mom before she even starts thinking about more children,” the source said.

Kardashian has been keeping a low profile recently and has not revealed any pictures of her daughter, as she tries to come to terms with motherhood and lose her excess baby weight. Although the source has mentioned that Kardashian has lost a lot of weight and is looking “amazing.”