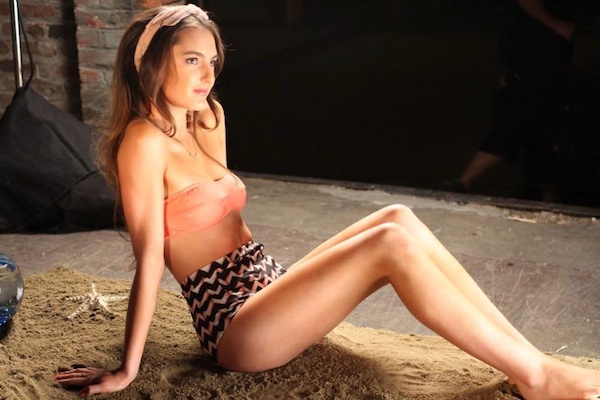 Sixteen-year-old Lena Fayre’s new video has us dreaming — dreaming of more from the young singer, and we here at SheKnows are very excited to be premiering the new video for her fun and upbeat song “Jukebox Love.”

Her first video, “Belong to You,” is a powerful ballad with an engaging story that really showcases the young talent. Recently, it was picked up to be shown on both VH1 and MTV and already has over 1 million views. If you haven’t seen it, you’ve got to watch it. It’s pretty amazing.

Check out our review of Lena’s EP >>

Just like Lena sings in “Jukebox Love,” “You’ve got me awake/awake in a dream,” that’s how it feels to be watching this — her second video.

We see the young singer in slow motion moving through a downtown warehouse/photo studio — from one staged area to another — while the video’s words appear on the screen.

By the way, this is one of the best and most creative lyric treatments for a video we’ve seen in a while. The words on the screen work well and add an extra bit of style.

Throughout the song, we see lights and random behind-the-scenes equipment while Lena interacts with the elements in the foreground.

She walks through a fake door to a pillow-covered bed. She types at an old school typewriter in the center of the warehouse. She opens a birdcage of butterflies in a loft with clerestory windows.

Finally, when we’ve exhausted every corner of the warehouse studio, we go to the roof where Lena looks torn off the streets of London in the late 1960s, and she lets a bouquet of gold balloons fly into the sunset.

She never lip-synchs to her own word, which is a refreshing change for a video. Lena doesn’t need to and it adds to that dreamlike feel for the viewer.

It all seems like we’re caught in Lena’s dream, and her dreams are beautifully lit and shot with perfect framing. She looks gorgeous from the first second we see her — even when she’s inexplicably tearing open a pillow to let the black feathers blow in the wind of the industrial fan.

Check out our interview with up-and-coming artist Rachel Wong >>

It’s clear that Lena has a long and dreamy career ahead of her, so click below and check out our premiere of Lena Fayre’s new video, “Jukebox Love.”

What do you think of Lena Fayre’s “Jukebox Love” video? Let us know in the comments below.