Rolling Stone magazine is at the center of a media storm after placing Boston bombing suspect Dzhokhar Tsarnaev on the cover of their August issue. 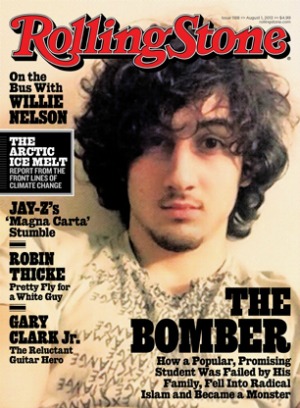 Rolling Stone has never been a magazine to shy away from controversy when it comes to their reporting. That is definitely the case with the August issue which features a cover photo of Boston Marathon bombing suspect Dzhokhar Tsarnaev.

The sepia-tone photo features the 19-year-old with hair that is mussed up with a pouty look on his face. It’s a somewhat sexy cover that is normally reserved for rock stars and hot celebrities in the entertainment industry. The headline under Tsarnaev’s face is titled, “The Bomber: How a popular, promising student was failed by his family, fell into radical Islam and became a monster.”

The moment the cover was released on Tuesday night by the publication, the online fury began. Angry comments showed up on Rolling Stone‘s Facebook page with readers criticizing the editors for romanticizing the suspect.

Megan Shaw posted, “You can include the story without glamorizing him by putting him on the cover. Total BS cop-out excuse.”

Another Facebook post from Ed Miller said, “Donate the profits from this edition to the Victim’s Families.”

A few retailers immediately responded to the outcry of the consumers. CVS, Walgreens and Massachusetts-based convenience store chain Tedeschi Food Shops announced that they would not be carrying the August issue in their stores.

CVS wrote on their Facebook page, “As a company with deep roots in New England and a strong presence in Boston, we believe this is the right decision out of respect for the victims of the attack and their loved ones.”

Even the mayor of Boston got involved by writing a letter to the magazine’s publisher Jann Wenner.

Mayor Thomas M. Menino sternly said, “Your August 3 cover rewards a terrorist with celebrity treatment. It is ill-conceived, at best, and re-affirms a terrible message that destruction gains fame for killers and their causes.’”

It took until Wednesday, but the editors of the music magazine finally responded to the controversy.

They shared, “Our hearts go out to the victims of the Boston Marathon bombing, and our thoughts are always with them and their families. The cover story we are publishing this week falls within the traditions of journalism and Rolling Stone’s long-standing commitment to serious and thoughtful coverage of the most important political and cultural issues of our day.”

The editors continued, “The fact that Dzhokhar Tsarnaev is young, and in the same age group as many of our readers, makes it all the more important for us to examine the complexities of this issue and gain a more complete understanding of how a tragedy like this happens.”

The publication is clearly not going to back away from the cover or the story even with their apology to the victims.

Tsarnaev was brought up on 30 charges, including four for murder, for the Boston Marathon incident. He pled not guilty to all charges against him on July 10.

Do you think the Rolling Stone cover is investigative journalism or sensationalism?