Rainn Wilson has a lot to say. The actor’s currently working on a memoir. This won’t be your grandma’s tell-all. It will be a fun look at his life, art and faith. 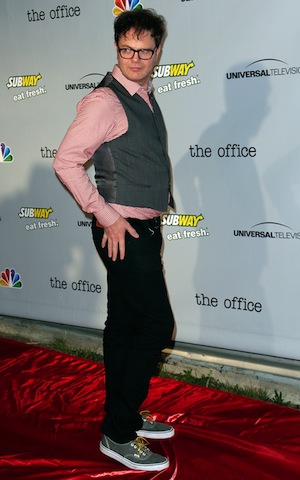 Are you ready to delve into the backstory of one of Hollywood’s most talented actors? Look no further, because Rainn Wilson is releasing a memoir. Well, he doesn’t really want to use the “M” word, but it’s one in the same.

Rainn Wilson: Yes, I look like a young Newt Gingrich >>

Wilson’s best known for his portrayal of Dwight Schrute on NBC’s The Office. Now that the show’s over, he’s moving on to a new chapter in his life. But first, he wants to take fans on a journey of how he got from point A to B.

“If I were in my 80s, had cured a disease and survived a war, I would be entitled to write a memoir. No,” Wilson reveals, “the guy who is best known for playing a paper salesman with a bad haircut, tweeting fart jokes and starting a quirky spirituality website does not merit a ‘memoir.’ For the time being, let’s call it a Serio-Comic Examination of my Life in Art, Faith and Comedy. And beets.”

We’re excited to hear about the actor’s professional and personal struggles. We’re sure his Serio-Comic Examination will be one of a kind. According to Entertainment Weekly, Wilson sold his memoir rights to the Dutton imprint. They’re expected to release the book in the fall of 2014.

The Office may be dead and gone, but Wilson will be back on television very soon. Stay tuned!

Are you interested in reading about Wilson’s life story?