Taylor Swift’s fans are not to be messed with, and one design company found it out the wrong way. They designed what they thought was a clever shirt for a T-Swift fan, but her Swifties don’t think it’s funny at all. 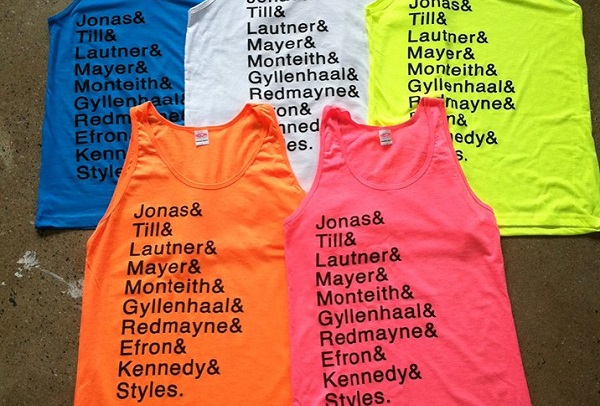 Taylor Swift is the subject of the second controversy involving a shirt in just a few months. An independent fashion company designed a shirt for a friend that has some T-Swift fans up in arms.

“A couple days ago our friend Matt asked us if we had time to make him and his friends some custom shirts to wear to a Taylor Swift concert,” Bad Kids Clothing wrote on their website. “We said, ‘Sure, what did you have in mind?’. He sent us the copy and an example of how he wanted it to look and we literally thought it was one of the most clever shirts we’ve ever seen.”

The shirt is simple, listing the last name of all of Swift’s former boyfriends (or rumored boyfriends).

Swift has had some troubles with boys in the past, and is currently single (as far as we know). But her love life always seems to be a topic of conversation.

The owners of the company said they posted the photo on Facebook, got a few “likes” and forgot about it, but then they started receiving messages; on Facebook and on the phone.

Another said, “You have underestimated the Swifties.”

But then the company started receiving threats.

“I was about to go to sleep and my phone rang,” the company wrote on their website. “I saw it was a random number and let it go. Suddenly, 3 more calls right in a row. I thought to myself that this was odd, so I checked my email. The subject of the emails were ‘F— YOU’ and ‘OFFENSIVE TAYLOR SWIFT SHIRT – TAKE IT DOWN!.’ Suddenly I realized what was happening.”

The company said they received 70+ emails, 20+ calls, 12 texts and “about 9 BILLION tweets” telling them to take the T-shirt down.

Battle of the Exes: Taylor Swift vs. Katy Perry >>

But for the so-called Swifties, it seems to be only about protecting their leader.

“You are getting a lot of hate,” another post wrote. “If I were you, I would give in and make a shirt that DOESN’T call people sluts.”

The company said they plan to go ahead with selling the shirt, although they have made one alteration. The shirt originally listed Glee‘s Cory Monteith, but removed his name out of respect after his death, according to the Business Insider.

Back in June, Abercrombie & Fitch released a shirt that said “More boyfriends than t.s.”, but eventually pulled that shirt as well at the request of her Swifties.