Remember when Adam Levine said he didn’t want to get married? Us, too. 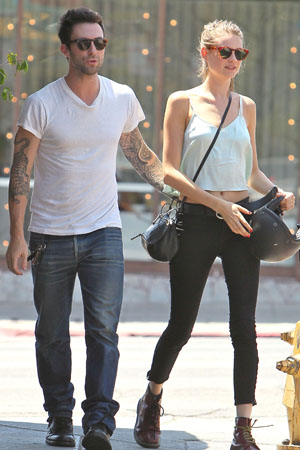 OK, we were a little surprised — and admittedly, a little heartbroken — when Maroon 5 frontman Adam Levine announced his engagement to Victoria’s Secret model Behati Prinsloo.

Weren’t they just broken up a few weeks ago? Yes, but that’s not the craziest part of this whole thing. The Voice hottie just told Nylon magazine that he never planned on getting married.

“I’m doing pretty well. If you don’t get married, you can’t get divorced,” Levine told the magazine in April.

He added, “Why couldn’t we learn from the devastatingly low percentage of successful marriages that our last generation went through?”

So, what gives? It seems like Levine might have suffered from a very real problem that many children of divorced parents experience: a fear of emotional intimacy.

“Adam’s parents divorced when he was a young boy, and this has left scars on him — a fear of emotional intimacy. He’s afraid of falling in love, marrying and ending up getting painfully divorced like his parents,” Carole Lieberman, M.D., psychiatrist and author of Bad Girls: Why Men Love Them & How Good Girls Can Learn Their Secrets, told SheKnows of why Levine flip-flopped on his views of matrimony.

“He doesn’t want to get too emotionally intimate with any woman because he’s afraid their marriage will end in divorce.”

Does that mean any woman can change a man from the non-marrying type to the walk-down-the-aisle type with a little love and prodding? Not necessarily: Some men just don’t want marriage at all (exhibit A: George Clooney), while others have feelings from the past that they need to shake before they can make a commitment.

We’re hoping that Levine and his Angel love go the distance — even if we do kind of hate her for taking one of Hollywood’s most eligible bachelors.

Do you think Adam Levine is ready to get married? Sound off below!

Celebrities and online dating: Who does it, who wants to
Awkward dating situations: Dating a friend’s ex
Heidi Klum is physically removing Seal from her life