In this episode of Burn Notice titled “All or Nothing,” Michael and Fi are forced to work together again, but Michael ultimately has to make a difficult decision that could spell the end of their relationship once and for all. 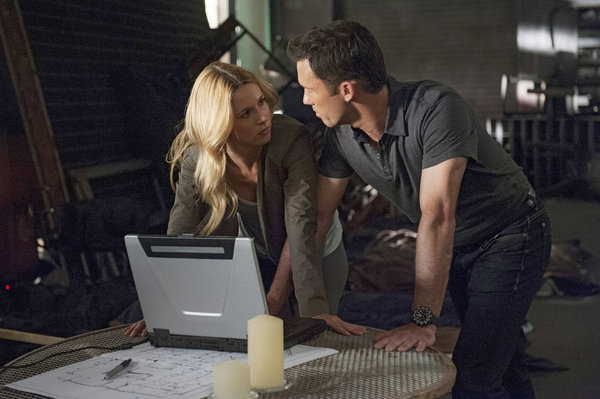 In last week’s episode, Michael (Jeffrey Donovan), Sam (Bruce Campbell) and Jesse (Coby Bell) had finally made it back to Miami with Sonya (Alona Tal). So Michael needed to get as close to their new boss as possible to find out who were the people pulling the strings on the whole operation. Sonya wanted to take down the ones who blew her cover and that involved getting a few old friends involved along the way.

Strong (Jack Coleman) decided that Fi (Gabrielle Anwar) needed to stay on Michael’s undercover team, but Michael wasn’t happy about it. Once they were working together, though, it almost felt like nothing had happened. As Fi said to Michael at one point, it was never their working relationship that was the problem, and that really showed in this episode. They went right back to playing their undercover parts (both as geeky computer hackers, which was especially hilarious) and reading each other’s signals easily to make their targets believe just about anything.

Things turned very real though when Fi found herself nearly falling to her death and only Michael’s strong arm pulling her back to safety. During the incident, their relationship flashed before Michael’s eyes (at least I assumed it was his) and there seemed to be some hope that maybe they could reconcile. But it was not to be, and Fi made it clear that she was done being beholden to him and was only interested in working off her debt.

Meanwhile, Sam and Jesse were on a mission of their own. After Barry (Paul Tei) agreed to help Michael and Fi with the hacker scheme, Sam and Jesse offer to help him get his girlfriend back. It was a bad day for past loves though and he wasn’t successful in his quest. It turned out Barry’s girl had gone and found herself someone new.

In the end, Michael returned to Sonya after the case was completed and demanded to finally meet the people in charge. She was reluctant at first, saying that he needed to be willing to sacrifice everything to do what she does. To prove his case, Michael let loose with a tirade that had me wondering just how much of it was purely for her benefit. When he was weeping over the losses he has suffered for his current mission, there was a lot of truth there. After his tearful admissions, Michael resorted to the next best way to get close to Sonya — he took her to his bed.

Michael decided to go all in on his mission, but I have to wonder now if he did it in some desperate hope that he can complete it and maybe get his life (and Fi) back. Or if he has nothing left now and did it so that he can at least have that one accomplishment.

“There is a difference between being in the dark and acting on faith.” 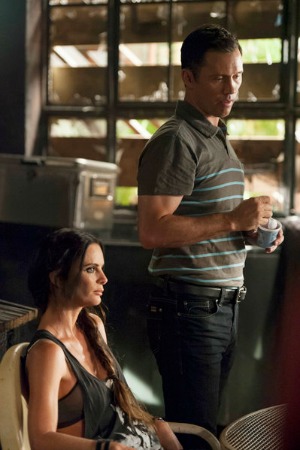 Michael playing doctor. I wish that had been half as dirty as it sounded, but it was still fun to watch.

Michael telling Fi that he found a few snow globes he could salvage. Aw.

“That’s very reassuring coming from the people who got me sent to prison.”

The team managing to fake a pretty impressive hack.

“And I’m gonna need plenty of yogurt in the fridge.”

Jesse referring to the car dealer as “Mr. Sleazy Pants.”

The flashes of their lives as Michael caught Fi and kept her from falling. Wow.

“OK, now that we got the cardio out of the way, let’s have a conversation.”

The absolutely ridiculous look on Michael’s face as he watched Fi flirting with Cody.

Jesse managing to talk Sonya and Sam down from storming in and possibly getting Michael killed.

“It also means your days of chasing pretty girls are over. Because in prison, you’re the pretty girl.”

“Working together was never our problem.”

Michael reassuring Fi that someday it would all be over.

“You’re the only thing I have left.”

What do you think of Michael’s decision to sleep with Sonya? Do you think he did it only for the good of the mission?