Lea Michele is with Cory Monteith’s family as they try to cope with his untimely death together. 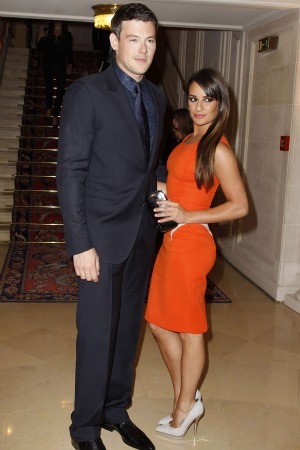 Lea Michele is heartbroken and grieving over the death of her boyfriend and costar Cory Monteith, and she is doing it with the people who can truly understand the depth of her pain: His family.

“Lea is deeply grateful for all the love and support she’s received from family, friends and fans. Since Cory’s passing, Lea has been grieving alongside his family and making appropriate arrangements with them,” the actress’ rep said in a statement to People magazine.

“They are supporting each other as they endure this profound loss together. We continue to ask the media to respect the privacy of Lea and Cory’s family.”

Monteith’s death was ruled an accidental overdose by Canadian authorities, who said today that the actor was killed by a deadly mix of heroin and alcohol.

“The investigation into this death by the BC Coroners Service is continuing, and no other details are available at this time,” the office said in a statement. “It should be noted that at this point there is no evidence to suggest Mr. Monteith’s death was anything other than a most-tragic accident. When the investigation is concluded, a Coroners Report will be issued.”

The ruling may have been a shock to his Los Angeles-area friends and colleagues, but not necessarily his pals at home in Canada. Sources say Monteith was living a double life: Clean and sober California guy, but drugged-out party animal up north.

His cousin seemed to confirm this suspicion in an interview with a Canadian news network before the autopsy results were released.

“Please don’t judge on what is gonna be coming out,” Richard Monteith told Canada’s Global BC TV on Monday. “Glass half full. All the good things that he’s done. There’s more things on that side to focus on.”