Shana is the newest addition to Rosewood High, much to the liars’ dismay, but they have bigger problems. Did anyone actually think Ezra and Aria were just playing Scrabble? 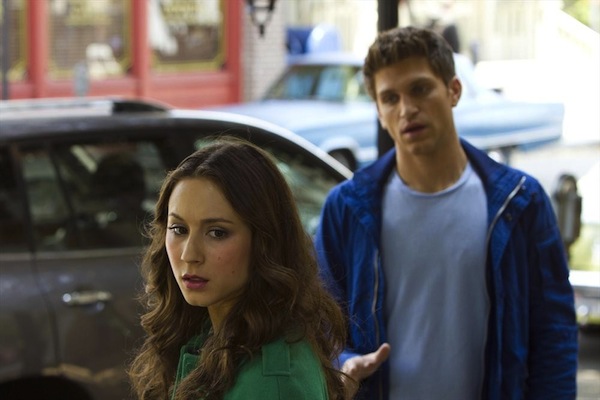 Only on ABC Family does Scrabble become code for other things on Pretty Little Liars… lots of other things. We’re talking Ezra and Aria, in case you didn’t already get the hint. Poor Aria (Lucy Hale) is facing the consequences, and brother Mike comes to the rescue probably is responsible for making things a lot worse. Unless it’s just A playing games. Again. (When is it not A playing games?) It’s hard to keep track.

Hanna (Ashley Benson) faces up to a seven-year sentence for possessing a concealed weapon. Detective Tanner knows Hanna is protecting someone and encourages her to tell the truth. Hanna’s mom and dad show up to bail her out, but Tanner is sure to mention they’re testing the gun for residue that would prove it was used to kill Wilden.Let’s start from the beginning.

Hanna tells her dad she found the gun in Ashley’s luggage. Ashley insists she took the gun only because she was scared, but she never used it and didn’t kill Wilden. She is convinced someone is setting her up. During the argument, Hanna gets a text from A, confirming that Ashley is being set up. A threatens to hurt Hanna’s parents if she says anything.

Emily (Shay Mitchell) thinks Hanna should tell her parents about A, but Hanna wants to protect them.

Emily has problems of her own. Shana shows up in the swim locker room. Not only is she the new student at Rosewood, but she’s already joined the swim team and made plans to be Jenna’s faithful seeing eye dog.

Mona’s back and spilling the truth

Aria offers to help her brother’s friend Connor with an essay. He needs to pass to continue playing rugby. The study session doesn’t go as expected. Connor kisses Aria, but she quickly pushes him away and says she isn’t interested in him like that.

The next day, Mona returns to school and the girls aren’t exactly happy to see her. She’s been tracking down the RV, and rats Spencer (Troian Bellisario) out for hiding Toby’s involvement.

Spencer doesn’t know what to do. On one hand, she has to help Hanna, but she also doesn’t want to ruin Toby’s chance to get information about his mom from A. She calls the sorority house and tracks down Mrs. Grunwald. Spencer thinks Ali was calling Mrs. Grunwald and wants to speak to the ex-sorority mother.

No Scrabble for Aria and Ezra 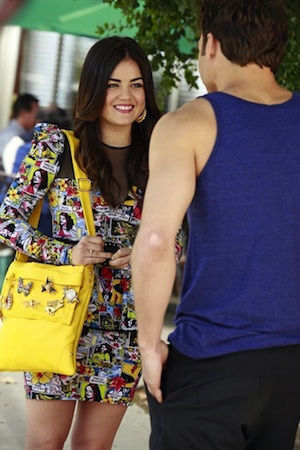 Emily convinces Hanna to turn over the dash cam CD. Emily thinks it could be Hanna’s only chance, and the cops don’t have to know where it came from. Hanna agrees and Emily discreetly leaves it at the station with a note alerting the police to the evidence. Don’t police stations have cameras?

The next day at school, Connor’s been spreading rumors that he and Aria did a lot more than kiss. When Aria confronts Connor about it, he tells her that everyone knows she and Ezra weren’t just Scrabble buddies. He asks her how many points for the word “slut.”

Ezra walks in but doesn’t hear the conversation. He just sees Aria in the boys’ locker room and asks why she’s there as she storms out. He realizes she’s upset and finds her in the hallway and asks her if she’s OK. She responds with anger and says he can’t be the guy she leans on anymore.

Don’t worry, she isn’t entirely alone. Mike comes to the rescue. Better late than never and promises to stand up for Aria in the future.

Spencer drives with Toby to see Mrs. Grunwald in Ravenswood. The town is strange and looks like it has quite the Instagram filter. (The show went with some weird lightning that’s just distracting.) Does that come standard when you cross the town line?

No one will speak to Spencer for directions, and she can’t find a street sign. Just when they’re about to leave, Spencer happens to see Mrs. Grunwald getting her hair done at a salon. Spencer talks with Mrs. Grunwald, but the woman claims not to know anything about Ali or the phone calls.

Then, weird music begins in the town and people gather at a memorial. Spencer sees Shana there, and Toby recognizes Jenna’s car. The two of them leave before Shana sees them too. Spencer thinks Shana got to Mrs. Grunwald first.

Connor is a little liar, too

Detective Tanner asks Emily down to the station and shows her the CD she found. It’s a person wearing an Emily mask (from the molds) holding up a guilty sign. Emily is shocked to discover someone switched the CDs and tells Tanner it must be a setup. Tanner does mention cameras so how, then, did it catch Emily at the station, but not A switching the CDs?

That night outside the coffee house, someone in a hooded jacket is smashing up Connor’s car. He catches them in the act, but the hooded figure runs. The person tagged “liar” on the side of Connor’s car. Was it Mike? Or A setting more traps?

Things get even worse that night. Detective Tanner arrests Ashley. The police got the results back on the gun. It was used to kill Wilden and Ashley’s fingerprints were found on the bullets.