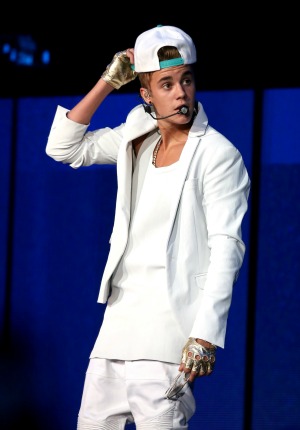 Oh, Justin Bieber, when will you stop with your stream of wild antics? The pop star has found himself in trouble, again after having been accused of spitting in an Ohio man’s face.

The incident is alleged to have happened over the weekend, when Bieber confronted a man inside a bar because he thought that he had been taking photographs of him.

The man states that he was innocent and thought the 19-year-old was on-edge because he was underage in a nightclub that was for people over 21.

The man went on to explain his encounter with the pop star during a call to the Dave and Jimmy Radio Show on WNCI saying, “Two of Bieber’s bouncers approached me and said I was trying to take pictures of Bieber.”

Bieber’s bouncers are alleged to have grabbed the man’s phone and started scrolling through it looking for the photographs and are reported to have found nothing. However, the bouncers still insisted that the man had been trying to take pictures of the singer.

That is when the event is reported to have gotten nasty and resulted in Justin Bieber allegedly confronting the man and, in a show of disgust, he proceeded to spit in his face.

According to TMZ, the man plans on filing charges and was also tested for Hepatitis, but the tests came back negative.

A spokesperson for Bieber has not yet made a statement, although a source close to the pop star has stated, “Everything’s been going well on tour. It’s sad that people would copycat other bogus stories to gain attention for themselves.”

This isn’t the first time that Bieber has run into trouble or been accused of something nasty! The superstar was alleged to have previously threatened to kill his neighbor in Calabasas, reports the Los Angeles Times.

It is reported that Bieber had been driving his Ferrari around his gated community, way beyond the speed limits in Calabasas, before one of his neighbors complained to him. The star then responded by ordering the man to leave his property, before spitting in his face and saying, “I’m going to f**king kill you.”

Or so it has been claimed, but who can believe everything they hear?