The usual suspects are back, including Helen Mirren as a retired MI6 agent who’s pitted against seductress Catherine Zeta-Jones, while mousy Mary-Louise Parker plays catch-up on her spastic spy moves, wanting to be part of Bruce Willis’ covert life. These women mean business and it’s fun to watch them, even if the action or plot isn’t terribly clever. 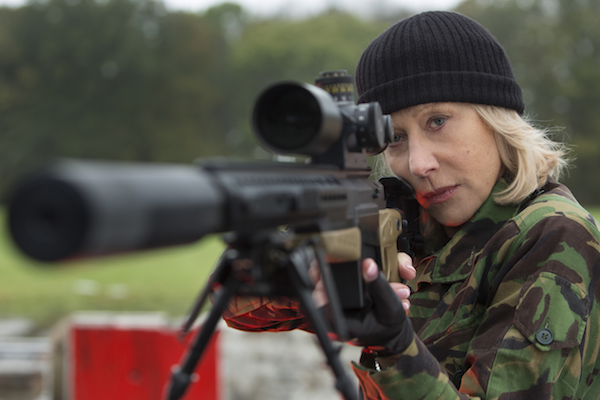 Retired black-ops CIA agent Frank Moses (Bruce Willis), has shacked up with Sarah Ross (Mary-Louise Parker), the damsel in distress he rescued in the first Red. He loves her dearly, but has no idea how to make a relationship work. Being a bad-a** killer doesn’t help — or does it? Sarah is starting to become curious about Frank’s secret spy world and a tad bit turned-on as he employs macho martial arts on his victims. Frank’s best friend and former black-op Marvin Boggs (John Malkovich), eggs Sarah on and encourages her to get more involved with Frank’s work by giving her a gun. Uh-oh! 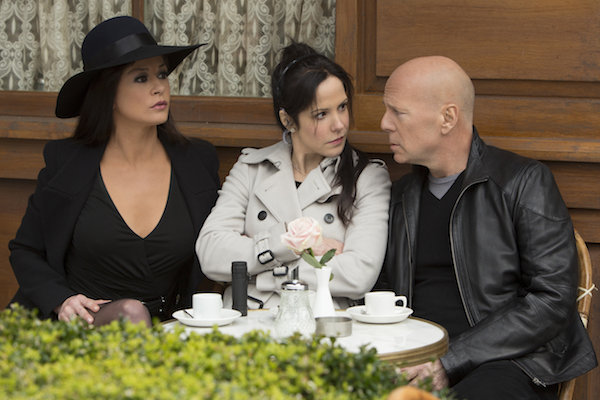 When underground chatter breaks out that Frank and Marvin may know the location of a hidden nuclear weapon, Pentagon special agent Jack Horton (Neal McDonough) is determined to capture them and use the top-secret info for his personal gain. But Frank and Marvin, along with the help of Sarah, aren’t about to let that happen and manage to escape before torture ensues. Next stop: Paris.

In the City of Light, Sarah can’t help but take in the romance and fall even deeper in love with Frank and the spy life. That is, until Katja (Catherine Zeta-Jones), a Russian temptress and Frank’s ex, greets Frank with a big, slobbery kiss — on the lips. Sarah’s radar beeps like she’s just come into contact with a nuclear bombshell and comically rues Katja and her feminine wiles. Katja is using Frank, of course, and when she gets what she needs from him, she’s gone in a heartbeat. Next stop: London.

In Britain, Frank, Marvin and Sarah hook up with their old friend Victoria  (Helen Mirren), who informs them she’s been hired to kill them. But she’s not the only assassin getting millions of dollars to send them six feet under. The sleek, sensual and lethal Han Cho Bai (Byung Hun Lee, recently seen in GI Joe: Retaliation as Storm Shadow), also has plans to send the trio to meet their maker once he learns Nightshade’s location. The problem is, only one person knows that intel and he’s incarcerated in a gulag within a gulag in the former Soviet Union. Next stop: Russia. 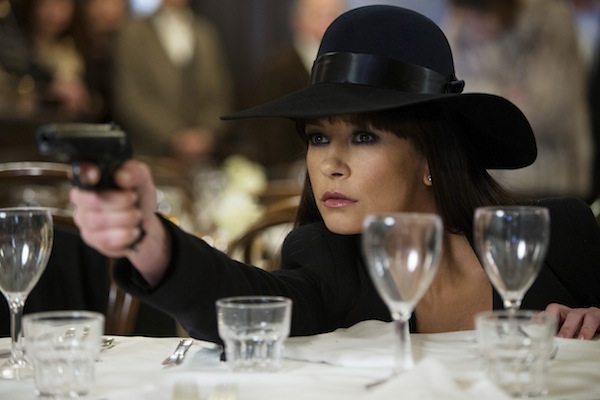 Red 2 plays out like the peeling of an onion, every layer provides new information. The problem with this action-comedy isn’t its delightful actors or even the dynamic “retired” characters. The problem is that nothing terribly new explodes on the screen and the humor is too limited to sustain the almost two hour movie. It’s as if the filmmakers relied solely on the witty dialogue and cute friendship/love triangles to propel the lackluster story.

Bottom line: If Red 2 could have been as clever as it was cute, it could have really stood out among the other films releasing this week. This sequel, however, isn’t so much red as it is rusty.

Run time is 1 hour, 56 minutes. There are no additional scenes after the credits.