Once again, Forbes has revealed Hollywood’s highest-paid actors. Some of them are earning cash both in front of and behind the camera. Find out what box office champ came in at number one.

Related story Channing Tatum Plans To Tell His Daughter About His Past as a Stripper: ‘I’m Not Gonna Lie to Her’ 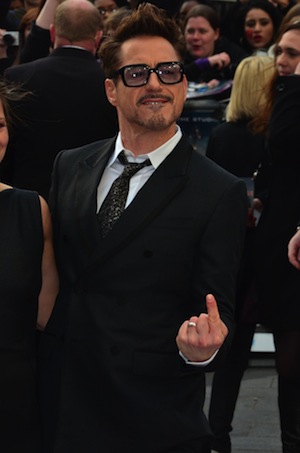 It’s that time again. Forbes has unveiled its list of Hollywood’s highest-paid actors. This year, the top spot went to the super charming, super charismatic Robert Downey, Jr. The actor and producer scored the biggest payday with $75 million between June 2012 and June 2013.

In 2012, Downey starred in the third highest-grossing film of all time, The Avengers. It earned over $1.5 billion worldwide. According to the site, because of his fan appeal, Downey received the largest salary out of his peers, including director Joss Whedon. He’s expected to return for the sequel, for which he’ll receive another lump sum upfront.

We also can’t forget this year’s Iron Man 3, which grossed $1.2 billion worldwide. Downey’s on a roll, but he’s not the only one making moves in Tinseltown. Coming in at number two is another acting and producing threat, Channing Tatum. He earned an impressive $60 million over the past year.

Did Tatum and Soderbergh split the cost of Magic Mike? >>

The site noted Tatum’s versatility. He went from a great dancer with a pretty face to a bonafide star. He’s just as savvy behind the camera as he is in front. He co-financed Magic Mike, which turned into a lucrative investment. The movie cost $7 million to make and earned $167 million at the box office. Yep, that happened.

Here’s the rest of Forbes top 5:

What do you think of this year’s top earners?