Angelina Jolie has reportedly decided to honor her mother on her wedding day and she has some very beautiful ideas of how she plans to do it.

The Salt actress has had a stressful last few months due to her double mastectomy surgery which happened after finding out that she was genetically prone to breast cancer. However, Jolie also has a lot to look forward to, as she’s currently planning her wedding to longtime love Brad Pitt. 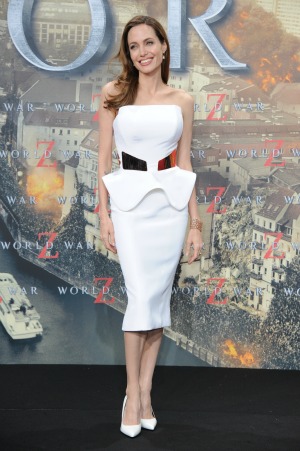 It has been widely reported that the couple would marry later this year at their luxury estate in France. Although, there are now other suggestions about the wedding destination.

“Hawaii brings back lots of memories of her mother for Angelina and was the one place that made Marcheline feel really happy,” an insider told the British edition of Grazia.

The beauty, who was recently in Hawaii scouting for film locations, was prompted to look at several wedding venues because the island is said to have been her late mother’s favorite place.

Angelina, who was very close to her mother Marcheline Bertrand, has decided to make a tribute to her during her upcoming nuptials. The actress plans to wear her mother’s wedding dress and possibly change the wedding location.

“Since having her operation and losing her aunt, Angelina says that she has been thinking about her mother more than ever, which is why she revisited her dress as an option,” an insider told the British edition of Grazia.

“Angie seems to think that it would be very fitting if they had the legal part of the ceremony in Hawaii, wearing her mother’s beautiful ’70s wedding dress and with only their children around them. It will be a very private, emotional affair.”

It has been reported that Angelina and Brad have already looked into getting a marriage license in Hawaii and an insider explained, “The celebration in France will mainly be a big party for their children, which their friends and family have been told will be held before the end of the summer.”

“The legal ceremony will be a special day to remember her mother and to celebrate new beginnings.”

What do you think of Angelina’s ideas to honor her mother in her wedding?