Friends, family and fans of Randy Travis get some good news as the singer awakens from his surgery and stabilizes after last week’s medical crisis.

It’s been a week full of challenges for country singer Randy Travis. After being admitted to the hospital 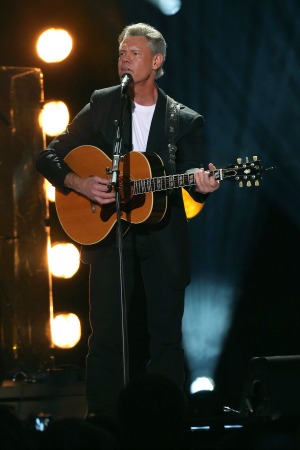 last Sunday for complications caused by his viral cardiomyopathy, he was quickly rushed into heart surgery, but things went from bad to worse when he suffered a stroke.

Last night, friends and family of the singer finally got a little bit of good news. USA Today reports that Travis has awakened from his surgery, but is still in critical condition.

Another medical crisis in 2012: Randy Travis hospitalized after fight at church >>

The singer’s physician posted a video on YouTube to talk about Travis’ condition. Cardiac surgeon Michael Mack said that Travis “did suffer an acute viral illness over the past three weeks, but that seems to have tipped over a more chronic condition. He has what’s called idiopathic cardiomyopathy, which means he has scarring of his heart muscle that is causing his heart to be weak and not able to support his circulation without help of either medical devices or medication.”

The Los Angeles Times reports that Travis’ family has a history of heart problems and no drugs or alcohol played a part in his condition.

Reports say that Travis is still on a ventilator, but he is breathing spontaneously and his doctors hope to have him weaned off of the machine and breathing on his own soon. Recent brains scans on Travis show decreased swelling in his brain after the stroke he suffered last week. All of this is hopeful news.

“He is awake and alert, interacting with his family and friends and beginning to start doing some early physical therapy,” said Doctor Gary Erwin, who anticipates that it will take Travis months to recover from the stroke. The singer is expected stay hospitalized in Plano for another two to three weeks so that doctors can continue to stabilize his heart and to begin “aggressive physical therapy.”

Travis’ fiancée, Mary Davis, thanked fans for all their prayers and support.

Travis “feels the hands of the doctors and the care of the nurses and the love of his fans,” she said. “His friends and family have all been touched by that. He is responding well to voices and he sees and he understands. He’s miles beyond where any of us thought he would be a few days ago.”