Actress Kristen Johnston has been brutally honest about her struggles with addiction. On Monday, she opened up about the death of Glee star Cory Monteith. 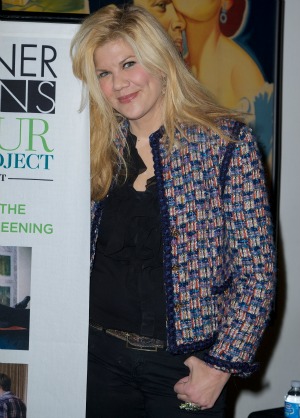 While family and friends wait for the autopsy and toxicology results in the death of Cory Monteith, celebrities are still reacting to the loss of the 31-year-old. On Monday night, Kristen Johnston sat down with HuffPost Live to discuss her own battles with addiction and her thoughts on the Glee star’s death.

The Exes star has been open about her substance abuse issues and her six-and-a-half-year struggle to get clean.

Johnston told HuffPost Live, “I was a drug addict my whole life, and an alcoholic, and my stomach ended up blowing up. My guts blew while I was in London about seven years ago and I should be dead because of my Vicodin use. It burned a hole and it ripped open and I became septic. It was gnarly.”

Matthew Perry on his alcoholism: “I was a sick guy” >>

She continued, “It was the beginning of the end of my drug use.”

The actress was quick to correct the interviewer, who had suggested that addiction was a big Hollywood issue.

She said, “It’s not anymore prevalent than anywhere else.”

The 45-year-old believes it is the media’s obsessive coverage of celebrities that makes it “an epidemic thing that the press presents as if it’s a Hollywood-only issue.”

Johnston has been active in the addiction recovery field, working with sober actor Matthew Perry and the National Association of Drug Court Professionals, whose stated mission is “to champion proven strategies within the judicial system that empower drug-using people to change their lives.” In addition, the former 3rd Rock from the Sun star wrote about her personal struggles in the 2012 book Guts.

As for the recent death of Monteith, Johnston was pretty straightforward about what might have happened.

Since she’s walked in Monteith’s shoes, Johnston knows how difficult the battle is.