Kim Kardashian’s newborn daughter is already on the fast track to becoming a fashion icon, having already accumulated a massive wardrobe and more than 100 pairs of shoes.

Kim Kardashian gave birth to her and Kanye West’s first child last month, baby daughter North West. The Keeping Up With the Kardashians reality TV star has already gathered a massive wardrobe for the tiny tot, despite the fact that North is merely 4 weeks old. 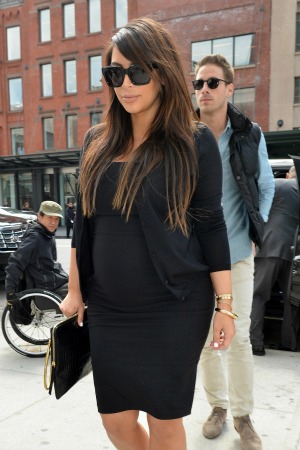 A source told OK! magazine, “North has already gotten the most outlandish, color-coordinated wardrobe you’ve ever seen. The baby has over 100 pairs of shoes. It’s not just onesies and newborn stuff. There are outfits all ready and hung on tiny hangers for when she’s 3 months, 6 months, a year and 2 years old. With little laced shoes and pink boots with matching pastel wraps, it’s adorable. Her aunts Kendall and Kylie have put themselves in charge of creating North’s wardrobe and daily ensembles.”

Baby North West is going to be a very spoiled little girl with Kylie, 15, and Kendall, 17, already doting on her and continuously buying her cute outfits, in addition to volunteering for baby-sitting duty.

The source continued to tell OK!, “Kendall and Kylie love the baby. They are constantly saying they can come over and baby-sit whenever Kim needs. They love spending time with her and think she is the cutest thing ever.”

The little girl’s aunts are not the only one to be overwhelming her with gifts, as Beyoncé and Jay Z, good friends of daddy Kanye West, have also been spending thousands of dollars on items for the tiny tot.

Beyoncé and Jay Z, who are parents to 18-month-old daughter Blue Ivy, have splurged on an array of presents. The gifts have included personalized Christian Dior baby booties and a three-piece sterling silver Elsa Peretti Padova baby set with the little tot’s name on it.